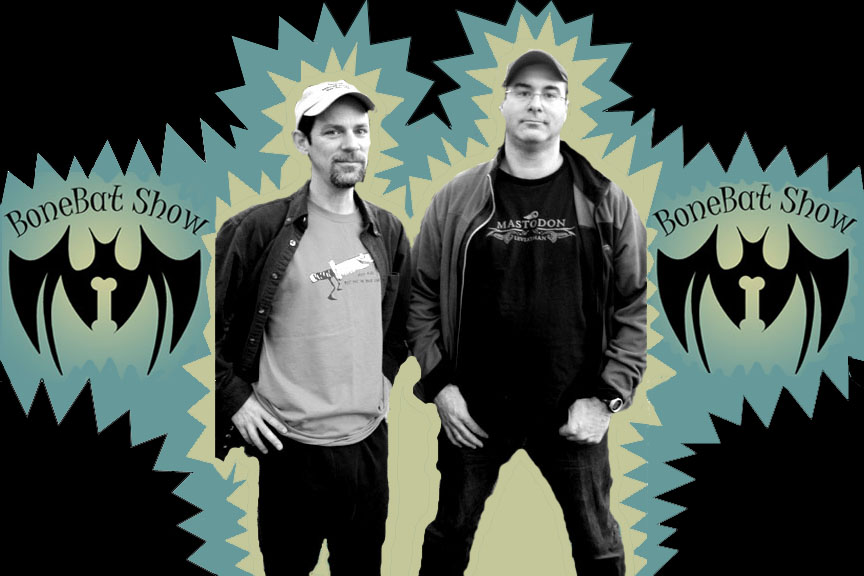 This Episode: Screw the Superbowl, It's SUPERSUCKERS SUNDAY! Propelled by
a plethora of high octane tunes from the "Greatest Rock and Roll Band in the World"
(tm), Steve and Gord cover a ton of ground as they discuss things inaugural, political
annoyances, unruly kids, raccoon fu, ugly shoes, cartooning and the creative process
thereof, the songs in our heads, the power of music, and crappy ad campaigns, and
recount the Supersuckers glorious history and detail exactly why they rule. All this plus
"What Pisses Us Off", Multimedia Triage, and a new batch of filthy jokes are yours
for the taking in episode 20 of The BoneBat Show! 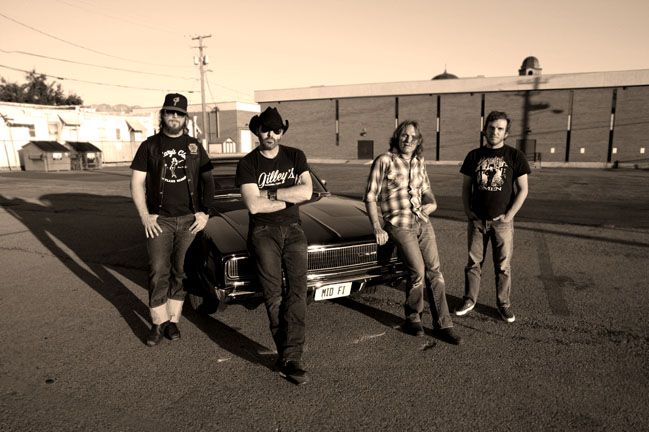 Episode Twenty Music:
In order: "I Like it All, Man", "What It Takes", "Anything Else", "Listen Up", "Paid", "She is Leaving", "When I Go, I'm
Gone", and "I'm A Fucking Genius", taken from the 2008 CD Get It Together; "The Evil Powers of Rock N Roll" taken
from the online only release Live At The Crocodile 2003; and "A Good Night for My Drinking", "Rock N Roll Records
(Ain't Selling This Year)", Rock Your Ass, "Pretty Fucked Up", "Bubble Gum and Beer", "Sleepy Vampire", "Damn my
Soul", "The Fight Song", "The Nowhere Special", "Bruises to Prove It", "Someday I Will Kill You" and "Goodbye",
taken from the 2003  release Motherfuckers Be Trippin'. All music by The Supersuckers, used courtesy of their own
bad selves, Chris Neal, and Mid Fi Records. Check 'em out at MySpace HERE.

All of the above CD's can be purchased at www.supersuckers.com HERE, or simply click the album covers below. 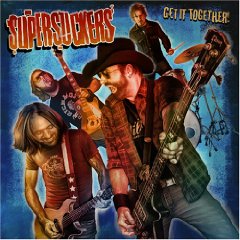 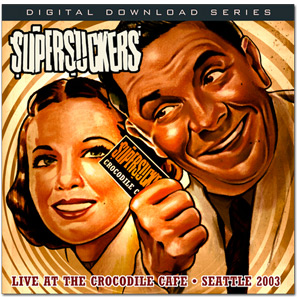 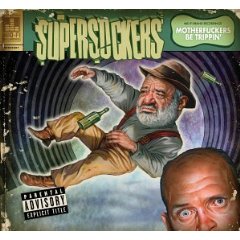 This Episode: In a show every bit as epic as it's title, Steve and Gord collide with
Jacob, David and Jeremy of the Pinto Gigante podcast to bring you a collossal year
end simulcast! No topic is safe as the crew decry that which pisses them off, and extol
the virtues of the year's finest movies, books, comics, and of course, THE METAL, in
this Rashomon of podcastery! But that's not all! We've got Anger! Floods! Obscenities!
Zombies! Innuendo! Oustings? Size! Deductive reasoning! And Filthy Jokes! All set to a
selection of some of the finest independent music to grace The BoneBat Show in 2008!
LISTEN NOW!

And when you're done with that? Listen to The Pinto Gigante version for a entirely
different take on the show, complete with even more incredible music!

Episode Nineteen Music:
"Ace of Spades" Written by Lemmy Kilmister, performed by Twistin' Tarantulas
"Beer and Lotion" by Barefoot Barnacle
"Super Shiny Metal" by Optimus Rhyme
"One Good Leg" by Sixty Watt Shaman
and "Hound Of Hades" by The Makai.
Links to purchaing info for each and every one of these fine bands can be found HERE.

This Episode: Steve and Gord celebrate the holiday season as they recount tales
of Christmas past, bitch about the perils of home ownership, and reveal their purist
tendencies (or lack thereof) as they argue about zombies, food, and film remakes,
all to tremendous tunes of Maryland's Sixty Watt Shaman! [MySpace] A stocking
full of  "What Pisses Us Off" and "Filthy Jokes of the Week" awaits as well, so
Happy Holidays from The BoneBat Show!

Episode Eighteen Music:
"Fear Death By Water", "Seed of Decades", "Reason To Live","Horse You Rode In On", "Cactus Mexicali",
"Southern Gentlemen", "Poor Robert Henry", "Devil in the Details, Pts 1 and 2", "Our Name Is War",
"One Good Leg","Rumor Den", "Interpanetary Pit Stop", "Low Earth Orbit", "Busy Dying" and "Supercreep"
are taken two by two from the CDs Seed of Decades,  Reason To Live, and Ultra Deluxe. Seed of Decades and
Reason To Live can be purchased through Rhapsody and Itunes. 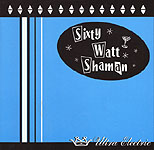 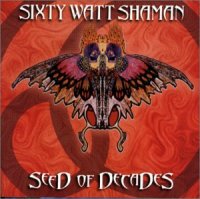 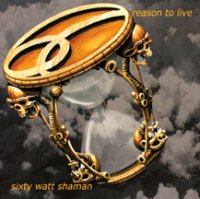 All of the above music is written and performed by Sixty Watt Shaman, used courtesy of  Reverend  Jim
and their own bad selves. You can check out their  MySpace HERE.  Note for the detail oriented: The line "Got
cornbread in my gunny sack" mentioned by Gord mentions is from the song "Horse You Rode In On".

This Episode: Steve is healthy again, but now Gord feels like crap, so he proceeds to
take out his aggravation on the entire western hemisphere, starting with the Motor
City, home to this weeks' incredible musical guests, retro Rock kings The Twistin'
Tarantulas! [Link],[MySpace] The duo move on to discuss a quick trip to Tijuana,
science, inappropriate humor, kids toothpaste, and a few recent books, movies, and
video games in a new segment entitled "Multimedia Triage". All this plus voicemails,
"What Pisses Us Off", and Steve and Gord's "Filthy Jokes of the Week" are yours
to enjoy in Episode 17 of ...The BoneBat Show! 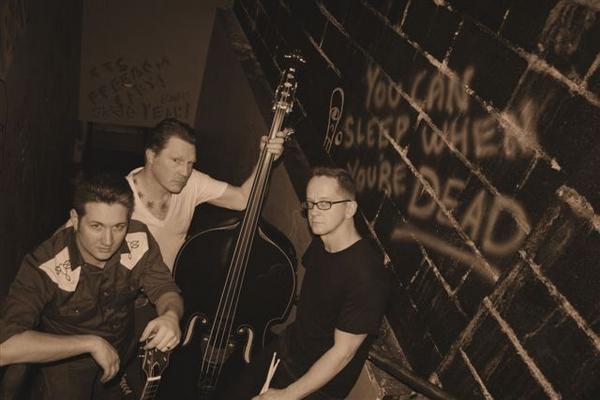 
Episode Seventeen Music:
"Ain't Got All Night", "Takin' You Down Tonight", "The Opus of El Destroyo", "I'm The Boy", "Rebelina",  "Let's
Go", "Chateau Eau De Ghetto", "(You Look Like) A Hundred Bucks","Blue Ball Blues", "Ace Of Spades"-(Yeah
THAT Ace of Spades!) , "I Got A Bad Habit or Two", "(You Must Be) Sniffin' Glue", "White Trash Express",
"Snake in the Grass", "El Destroyo" and "Never Do It Again" are taken two by two from the CDs Attack of the Twistin' Tarantulas and  El Destroyo, which can, and should, be purchased immediately from the band at
www.twistintarantulas.com, or by clicking the images below.  The band's latest cd Welcome to Our Underworld
is available now and can be purchased through Rhapsody and Itunes. 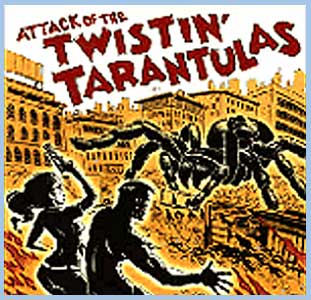 All of the above music is written and performed by The Twistin' Tarantulas, courtesy of  Pistol Pete Midtgard
and their own bad selves, with the exception of "Ace of Spades", by the one and only Ian "Lemmy" Kilmister .
Additionally, you can check out their  MySpace HERE. 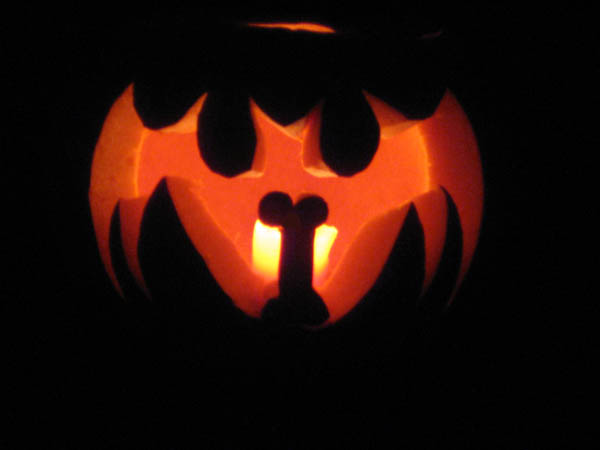 This Episode: Steve and Gord whip out their huge goody sacks, chock full of sweet
treats for your Halloween pleasure! Joined once again by the Julie, the beautiful bride
of Bonehand, they proceed to get pissed about politics, visit WA's crappiest haunted
trail, answer a couple of voicemails, pimp-slap a fellow podcast, recap the Revenant Film Festival [Link], make with the filthy jokes, and consider 13 of the creepiest querys
ever collated in the Sinister Survey, all set to the American Deathphonic Black Metal
sounds of Battle Ground, Washington's own Ceremonial Castings! [Link] 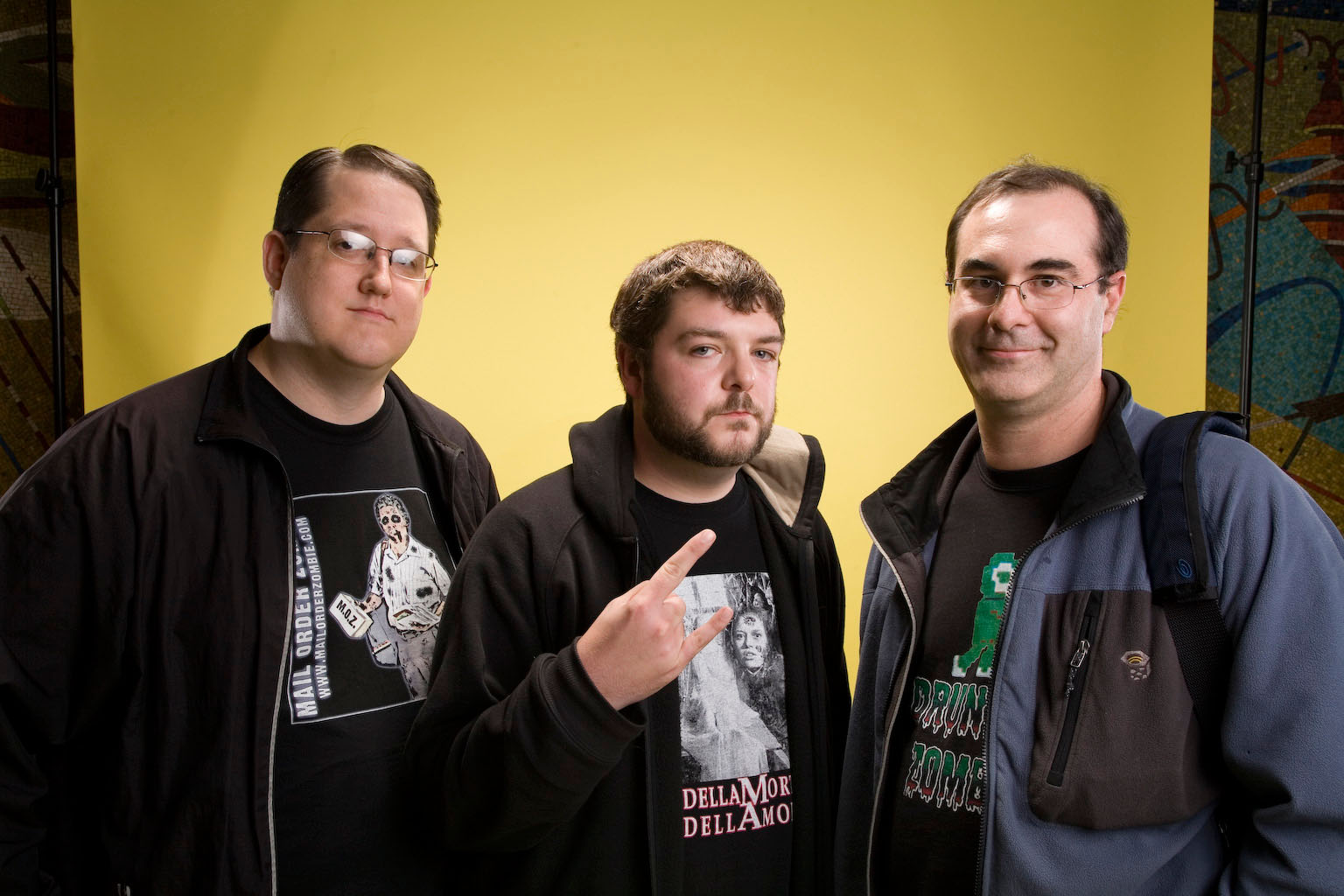 Episode Sixteen Music:
"Beneath The Sabbath Moon", "Where the Witches Waltz", "The Devil in Salem", "Obsidian Spells of Hysteria",
"The Dreamstalk Masquerade", "Crucible of the Cross", " Damned Be Those of the Craft", "Onwards to Gallows Hill",
and "When The Winter Spectres Come", all taken from the 2008 CD Salem 1692;  "I Am A Thousand Fires" and
"I Am The Black Wizards" from 2006's Barbaric is the Beast; "Come Forth Damnation", "Descration of Grace", and
"Immortal Black Art" taken from the 2005 release Immortal Black Art. All music by Ceremonial Castings, courtesy
of  their own bad selves.  You can check out their  MySpace HERE, or by clicking the images below. 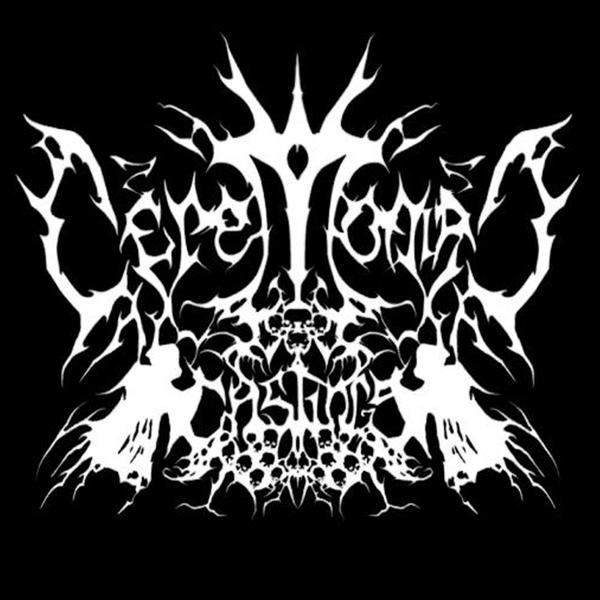 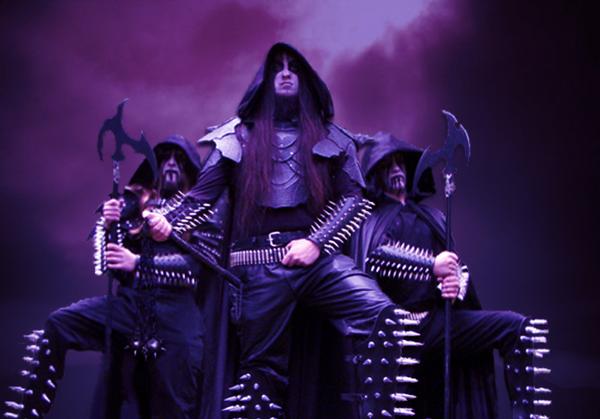 Julie's new book UNCOMMON CROCHET is NOW on sale, and can be purchased  here at Powell's.com,
or at finer bookshops everywhere. 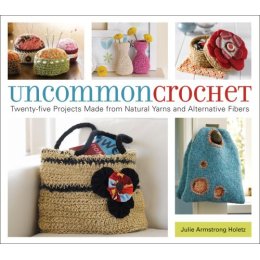 This Episode: Steve and Gord throw themselves into The Great Pit of Cartoons, where
they discover a new definition of pain and suffering as they discuss kid-oriented things
that piss them off, giggle at child profanity, spew a few more filthy jokes, and slowly
digest seventy-some years of amazing animation, all amidst the Star Wars-ian Darth
Metal grandeur of the UK's mighty Anchorhead! [Link]

"Shredisode IV", "Imperial March", "Shredisode V (edit)", "Return of the Shredi (edit)", and "Shredisode IV (edit)".
All music by Anchorhead, courtesy of  their own bad selves.  You can check out Anchorhead's MySpace HERE. 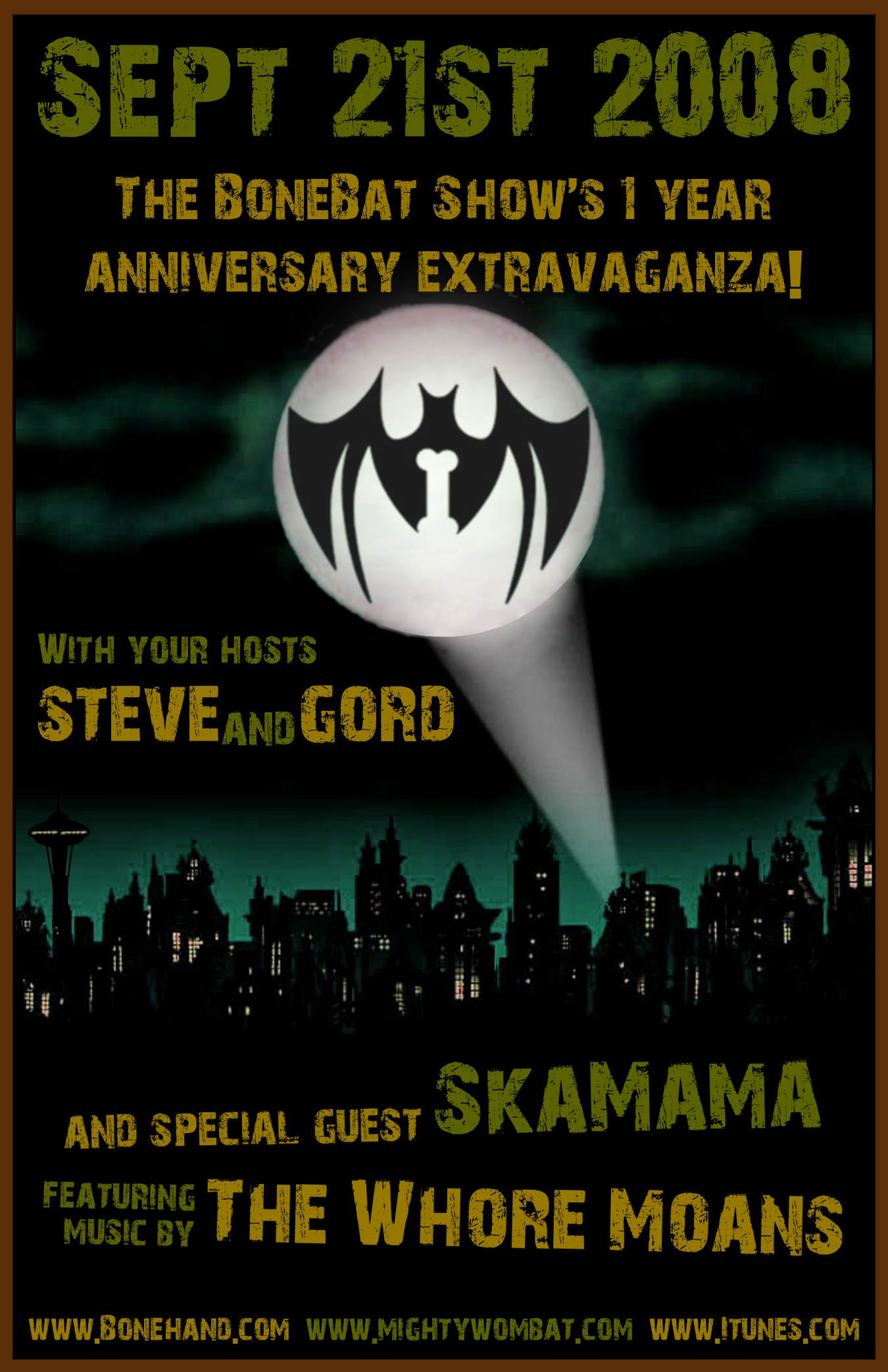 This Episode: Skamama rejoins Steve and Gord to celebrate one whole year of heat-
crazed audio debauchery, as they unveil their new theme song, hear from a few friends,
discuss homeowner annoyances, traffic trouble, kids taking the law into their own hands
and censorship, tell a few dirty jokes, and thank everyone they can think of, all to the
amazing garage-rockin' sounds of Seattle's The Whore Moans! [Link]

"Beware, the Wolf Spider", "X-Ray Eyes", "Power of Pride",  "Disappear", "I Say Blood Three Times", "The Headstone
Stomp", "I Have a Knife", "Sweet as a Peach", "I Hope You Roll Your Car on the Freeway", "5250 Blur", and
"Some Kinda Hate", all but the latter taken from the CD Watch Out For This Thing on Wizard House Recordings.

All music by The Whore Moans, courtesy of  Jonny and their own bad selves. The Whore Moans' first full-length album
Watch Out For This Thing is out now! You can pick it up at:

Or click the cover below to buy it right this very minute at CD Baby! Get your ass in gear! 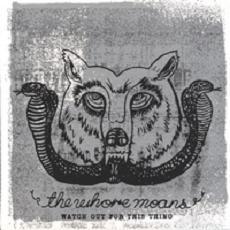 Julie's new book UNCOMMON CROCHET is NOW on sale, and can be purchased  here at Powell's.com,
or at finer bookshops everywhere.

This Episode: Steve and Gord are joined in studio by BJ, Chad, Jeramee and Aubrey
of Seattle death merchants I Rot [Link], where they ratchet up the raunch factor
exponentially, discuss drawbacks of the English language and transportation, learn a
little band history, bow to The Metal, give away another free CD, and close out with
a filthy joke free-for-all, all while Gord struggles with sound quality and Steve does
his level best to wear out the F-word. 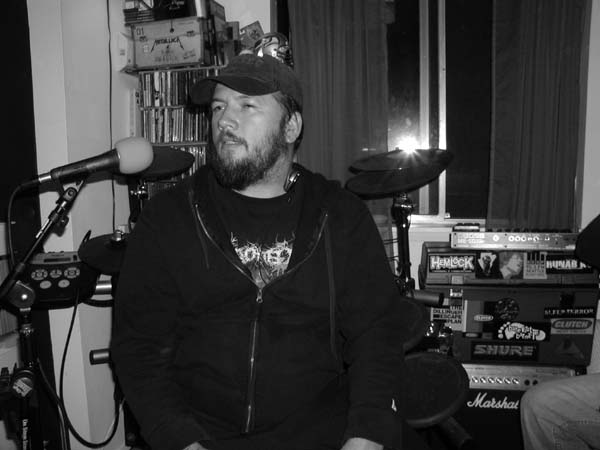 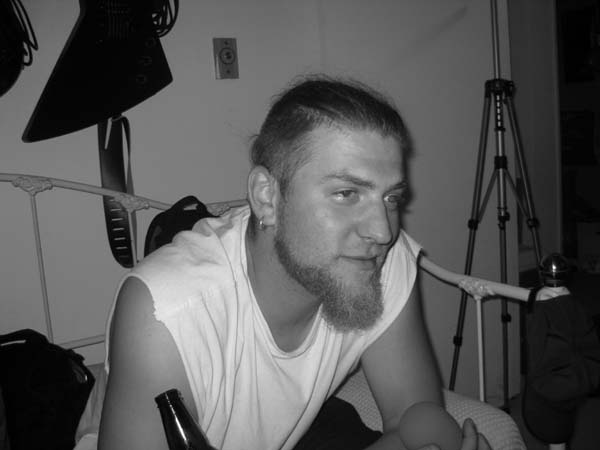 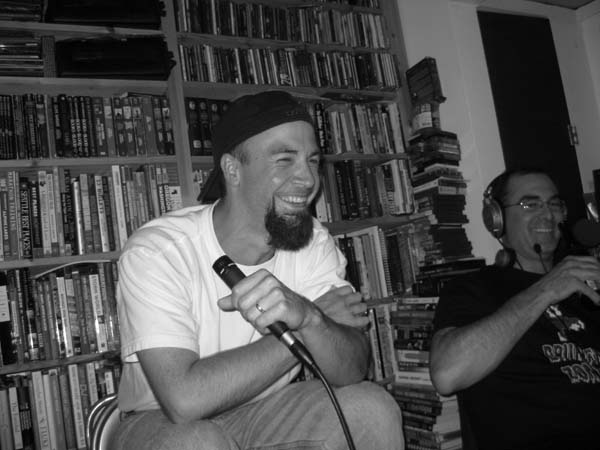 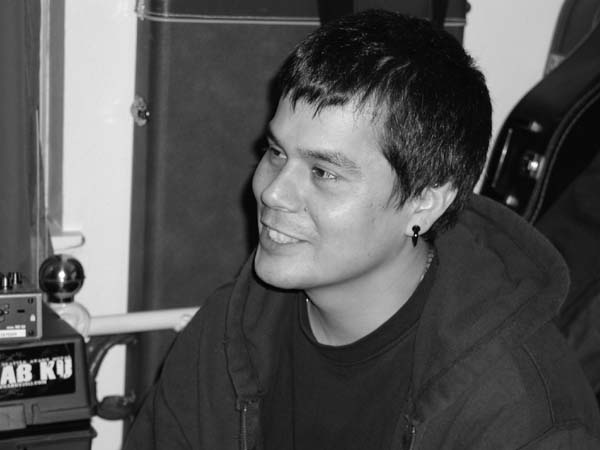 "Can You Tell", "The Most Horrible", "Vicarious",  "Monsters On The Hill", "Death Merchant 2008", "Travelin' Man",
"Violence in Human Form", "Patience", "Lines to Cross", "Whoregun Grinder", Kill Everything" and "Hell Has Come",
taken from the CD's I ROT and Kill Everything [Review] respectively.

All music by I ROT, courtesy of  their own bad selves.  Click the banner below to check 'em out.

This Episode: It's all about the good life, as Steve and Gord discuss some of their favorite
things, including beer, sex, true wildlife stories, comic book movies, good music and where
to find it, and filthy jokery; and digress to fondle the letter B while ruminating on the seedier
side of Sesame Street.

This episode's music comes courtesy of Seattle's incredible Optimus Rhyme! [Link].
This band is amazing, so buy their CD's, now! 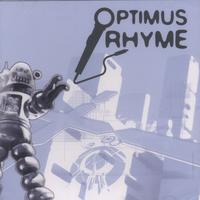 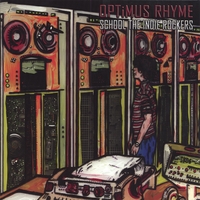 This Episode: Steve and Gord are joined by Jorge Meneses of Barefoot Barnacle [Link]
and let loose with their crudest effort yet, as they get pissed-off all over again, recount tales
of the dreaded frijole pit, discuss the travails of green commuting, mock the bass player,
peep a few summer flicks, and blow their load of filthy jokes.
This episode's music comes courtesy of Seattle's Hunab Ku. [Link]. 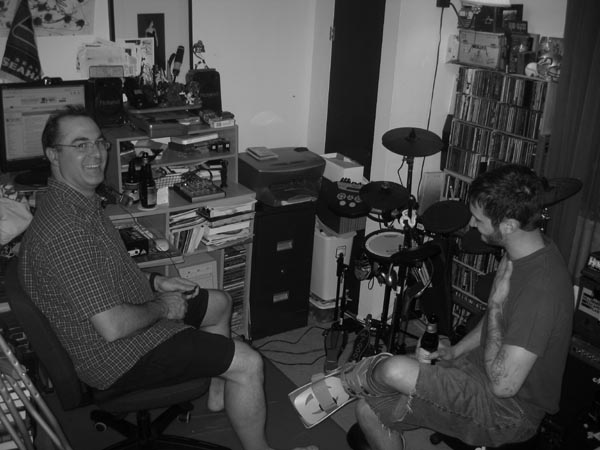 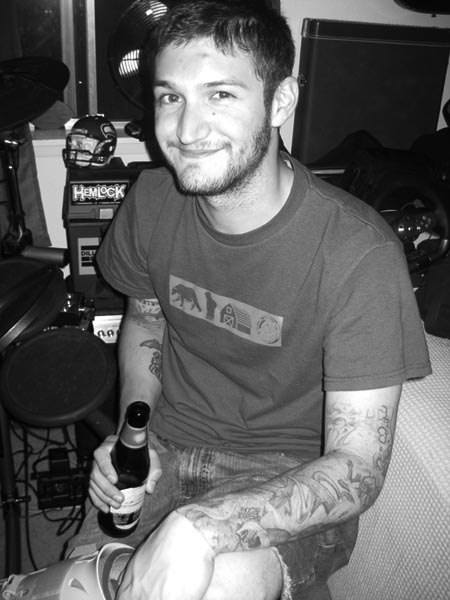 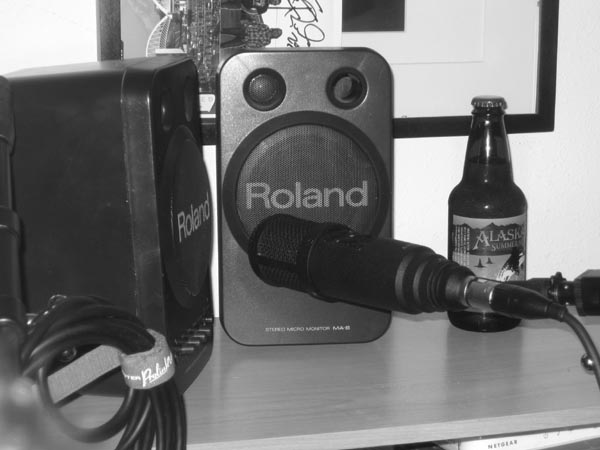 Episode Eleven Music:
"Midnight Assassin", "Houdini's Achilles Heel", "Cloud of Synthetic Locusts", "Murmurs of Asmodai", "The Departure",
"Pecking Out my Stained Glass Eyes", and "Teetering on the Edge of Nothingness", by Hunab Ku, [Link], originally taken
from the CD The Gaze Inward [Review], on Blacksheep records.  Click HERE or on the cover below to buy!

Additionally, the re-recorded versions heard on this show feature new guitarist Luke Jaeger, and can be purchased
directly from the band at their [MySpace]. All music used courtesy of Mike, Luke and Hunab Ku.

All music contained within BoneBat is original and copyright of the artist.