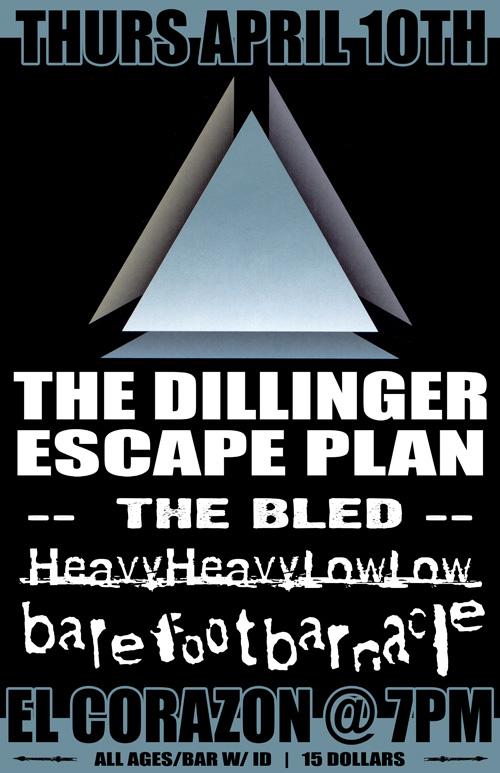 Dillinger Escape Plan, with The Bled, HeavyHeavyLowLow and Barefoot Barnacle

The last few weeks have been fantastic for fans of live cutting-edge metal in . First, we get an
appearance from the amazing Meshuggah on the C U LA-Tour, and now a visit from metal’s preeminent
mathematicians, the Dillinger Escape Plan, touring behind their amazing latest CD Ire Works. Being as
this band is arguably at the apex of the techmetal realm, it was definitely worth another trip to El Corazon.

Opening the show was ’s own Barefoot Barnacle, who weathered a classic slow-motion van
breakdown scenario en route to the gig, making it just in time to open for their heroes in Dillinger. And tore it
open they did, shoelessly kicking things after a brief electro-drone intro with new track “Mike the Headless
Chicken”, guitarists Jorge and Doug trading jaggedly discordant riffs in front of the raucous hometown crowd.
This was followed by killer versions of a few old favorites, highlighted by an amazing “Beer and Lotion”, tight
and heavy as always courtesy of drummer Jon and Godzilla-stomping bassist Alex. The band finished with
a crushing take on “Pubic Pig-Tales”, putting an electrifying finishing touch on the all too brief set. I look
forward to a headlining set soon from this scorching band. 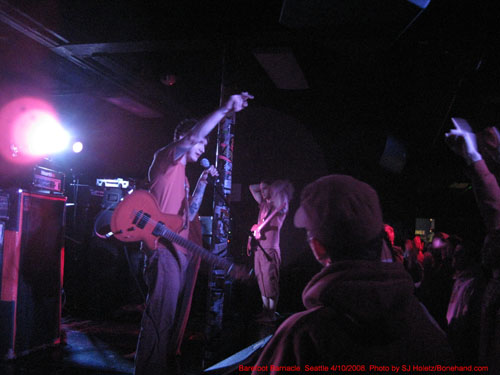 Barnacle was followed by the evening's beer break in ’s HeavyHeavyLowLow, whose
unique mixture of garage rock and tech metal might sound interesting on paper, but instead comes off
like a Vines cover band with a breakdown in each 3 minute song. The band was led by frontman Robbie
Smith, whose “artistic decision” to lie howling in a fetal position in front of the kick drum for an entire
song failed to the meet my bare minimum requirement for entertainment value. Next!

Next up would be ’s The Bled, who laid down an amazingly dense post-metallic
wall of sound, which was cut nicely by loads of above the 12th fret melody lines from guitarists
Ross Ott and Jeremy Talley. I hadn’t heard them before, but cool band, cool sound.
And thus, the stage was set for evening’s headliners, who hit the stage with a vengeance to Miss
Machine opener “Panasonic Youth”. The Dillinger Escape Plan was hyper kinetic from the word go, as
singer Greg Pucciato, bassist and guitarists Ben Weinman and Jeff Tuttle careened around the stage like
electrons around the nucleus of drummer Gil Sharone’s glowing kit. The atomic analogy proved apt both
physically and sonically, as the drummer’s work that held it all together, informing even the most hardcore
sections with an element of swing.

The DEP set was an exercise in contrasts, covering an excellent cross-section of tunes from the
super technical tracks from Calculating Infinity thru the catchier moments from Ire Works, alternating tension
and fluidity in a masterful fashion. The band was remarkably tight and hammered the set home with brutal
efficiency; proggy, jazzy or poppy moments serving to soothe the brain momentarily before the next bludgeoning.
This, coupled with the glow-in-the-dark drum kit and stacks of lite-brite encrusted cabinets, resulted in
an impressively entertaining set, every bit as interesting visually as it was musically.  DEP blew a hole in the
audience and called it a night in a little over an hour, and frankly, I could have gone for twice that easily. This
was one hell of a band putting on one hell of a show.

Eating the Porridge and Killing the Bears