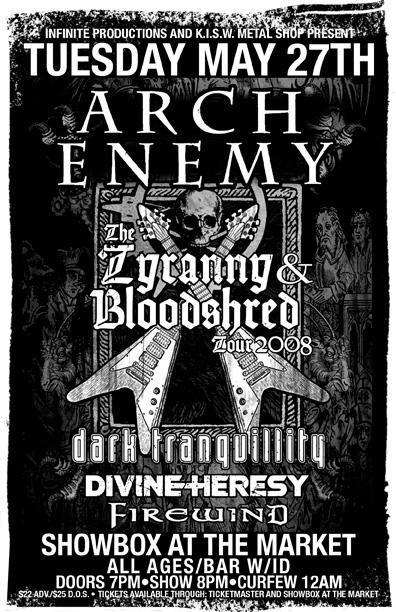 
Flashback to 2005: Coming off perhaps my 100th listen of Doomsday Machine that summer,
I hit the road early to catch Arch Enemy as they opened the day at the Seattle stop of Ozzfest.
I arrive 45 minutes prior to their projected start time and line up to enter the White River
Amphitheater. There I would stand for the next hour, in a long sluggishly moving line, seething
in a blind rage as I vaguely hear Arch Enemy tear through their entire set from the parking lot,
daydreams of a trip to Cancun hotels, or maybe a movie-esque scene of my sandals approaching
a row of hotels in Dominican Republic the only things keeping me from screaming...

Forward to 2008: Things were FINALLY set right this week as Arch Enemy returned to the
Emerald City as victorious headliners on the Tyranny and Bloodshred (sic) Tour.

And I was there to see it.

The evenings festivities were kicked off by Greek power-metallers Firewind, [Link] [MySpace]
led by former touring Arch Enemy guitarist Gus G.  The set started out somewhat lacking in energy,
perhaps due to the fact that AE's guitar tech saw fit to keep changing strings ON THE FREAKING LEFT
SIDE OF THE STAGE for the first half of Firewind's set, a move that I thought was distracting and more
than a little disrespectful to their opening act. The band powered through, however, with a solid version of
current single "Mercenary Man". Frontman Apollo Papathanasio delivered a soaring vocal on this one,
his delivery reminding me alternately of both Dio and Dickenson. A scorching version of "The Fire and the
Fury" proved the perfect forum for Gus G's pyrotechnics, as did a late set shred-off between him and
keyboardist Bob Katsionis. This definitely lent a Dragonforce Jr. vibe to the proceedings, whetting
appetites for the axework to come. 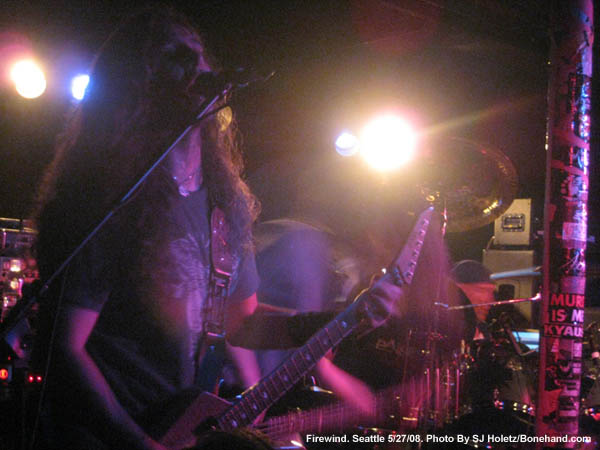 Next up, pseudo-supergroup Divine Heresy [MySpace], the latest project from former Fear
Factory guitarist Dino Cazares. While I found the tunes themselves to be pretty much average fare, it's
no argument that the band can flat out work a room. The band's intense metalcore groove had the crowd
roiling immediately, locked firmly in place by bassist Joe Payne, best known for his stint and subsequent
ejection from Nile, and speed-demon drummer Tim Yeung. However the real highlight of the short set
was the super-intense, eye's-buggin-out performance of touring vocalist Jake Veredika, who hit the
crowd hard with his Anselmo-esque roar. I hope Dino keeps this cat around, he's the real deal.

Note: Former Fear Factory members are working their ass off these days. Vocalist C. Burton
Bell hit town last month on tour with Ministry, and now Dino rolls through with his new joint.  I just
need to catch Zimmer's Hole in September to complete the hat trick. 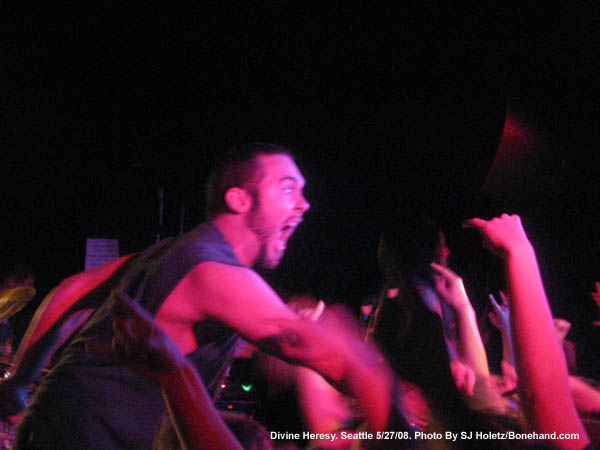 Then it was Dark Tranquillity's [Link], [MySpace] turn to take the stage once again, and although
their set was far more concise than their show last April [Link], it was every bit as tight and riveting. I am
always impressed with this bands intelligence, musicianship, and precise guitar interplay, and once again
they did not dissapoint. Vocallist Mikael Stanne stalked the stage with his usual mix of rage and good
humor ("From here on out, it's all Swedish Death Metal!") as guitarists Niklas Sundin and Martin Henriksson
strafed the crowd with top quality riffage. This was another great set from Dark Tranquillity, a true class
act in the metal business.

So it was that after a 3 year delay, amidst a sea of smoke and strobelights, I finally saw Sweden's
Arch Enemy [Link], [MySpace] take the stage. Opening with the anthemic "Blood On Your Hands",
the band proceeded to crush the audience beneath wave after wave of stunning guitarwork from
brothers Michael and Christopher Amott, as frontwoman Angela Gossow raged in front of them, arm
raised to the sky in metal defiance.

I couldn't help but be a little awed by the band as they ripped through favorite after favorite in
"Ravenous", "Dead Eyes See no Future", and "My Apocalypse". I mean, think about it: In Michael A.
and drummer Daniel Erlandsson you have one half of the mighty Carcass! Not to mention bassist
Sharlee D'Angelo, coolly rocking the Ibanez Iceman, also bassist for both King Diamond AND
Witchery! How badass is that?

Between clinics of tastefully technical shredding put on by the Amotts, Gossow did a masterful
job working the packed crowd to a frenzy, impressing with both vocal stopping power and a genuine
stage presence. I was already a fan of Angela, both due to her skill as one of few women vocalists
who truly owns a Death Metal growl, as well as her work in the metal community, which I was aware
of through her support of upcoming artists and such projects as the Portland, OR Girl's Rock Camp [Link].
Even so, it was still pretty moving when she paused the show to present a 7-year-old girl with the gift
of a spiked belt, hopefully cementing another music fan for life. Nicely done, AG.

Additional show highlights were an amazing version of "Revolution Begins" that led to an extremely
cool drum solo from Erlandsson, and the show's closing setpiece: a series of brilliant and lengthy guitar
solos which bracketed awesome takes on "Nemesis" and "We Will Rise", perfectly ending an evening
of amazing axemanship, and finally assuaging my lingering annoyance from '05. I am satisfied at last. 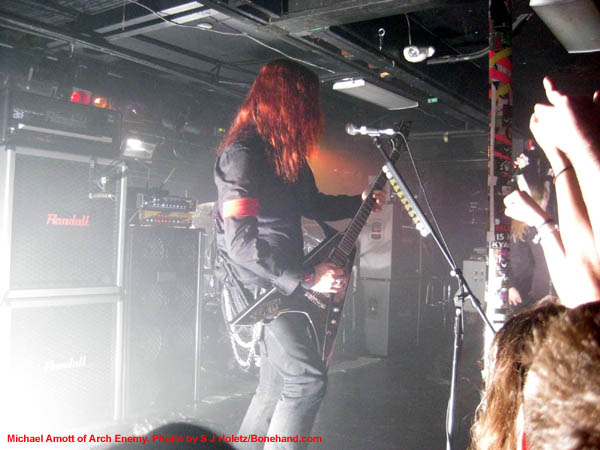 Firewind Set List
Into The Fire
Tyranny (?)
Mercenary Man
Head Up High
The Fire and the Fury (Inst)
Till The End Of Time

Divine Heresy Set List
Bleed The Fifth
Saviour Self
Impossible is Nothing (?)
False Gospel
This Threat is Real
Failed Creation 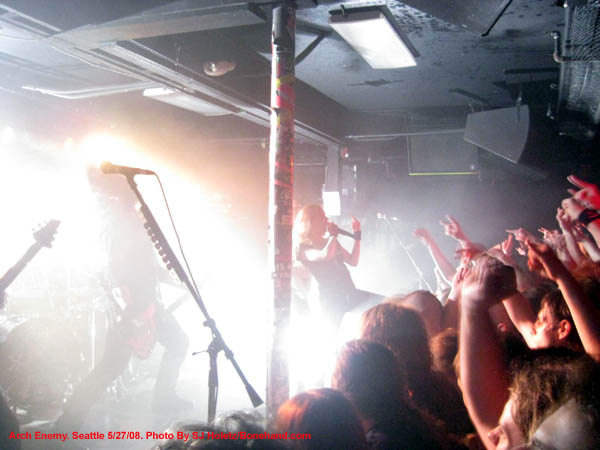