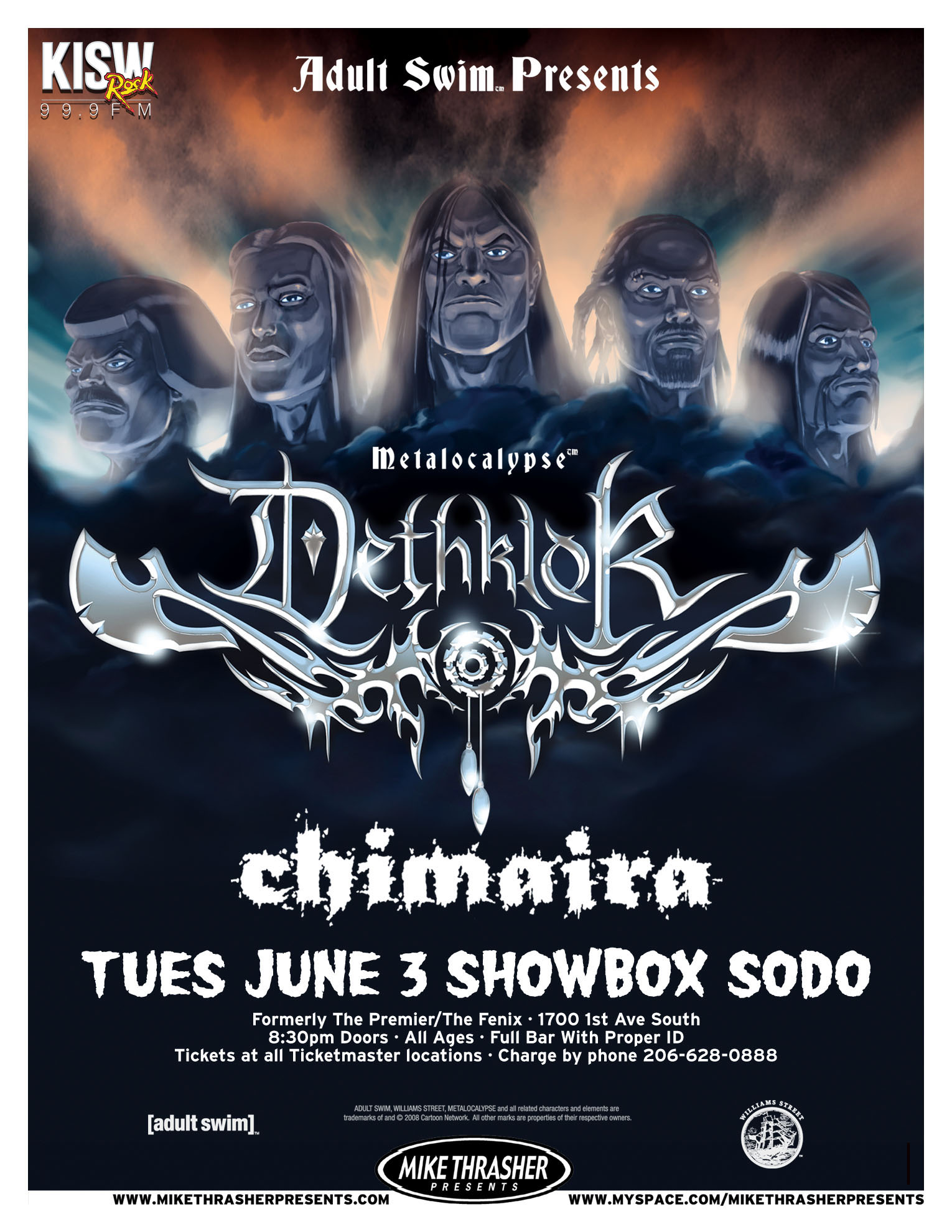 
It’s not every day one gets to catch the world’s greatest cartoon metal band live, so this week's
stop of the Dethklok tour was an absolute must for the discerning Seattle metalhead. For the uninitiated,
Dethklok are the stars of the Adult Swim animated series Metalocalypse, which details the misadventures
of a death metal band grown so insanely powerful that it constitutes the world’s twelfth largest economy.
While the show is a comedic, the fanboy level love of metal displayed by show creators Brendon Small
and Tommy Blacha is deadly serious, as illustrated by the expertly crafted music that populates the show.

In bringing this multimedia extravaganza on the the road, Small has put together a top notch touring band,
featuring former Zappa sideman Mike Kenneally (guitar), bassist Brian Beller, and legendary drummer Gene Hoglan,
known for his work with Death, Dark Angel and Strapping Young Lad. In the live setting, Small and the touring
band play before a large video screen, while videos of the animated Dethklok are projected above them.The
concept was ironed out last fall in a series of college dates before being taken on this first full US tour, of which
Seattle was the second date.

While the continuing tour would feature as an opening act Louisiana act Soilent Green, [MySpace]
the band unfortunately did not appear at this show. I had been looking forward to checking out this continuation
of the Goatwhore axis live, but as the band was in town a few days prior on the Death Angel tour, the omission
was understandable. 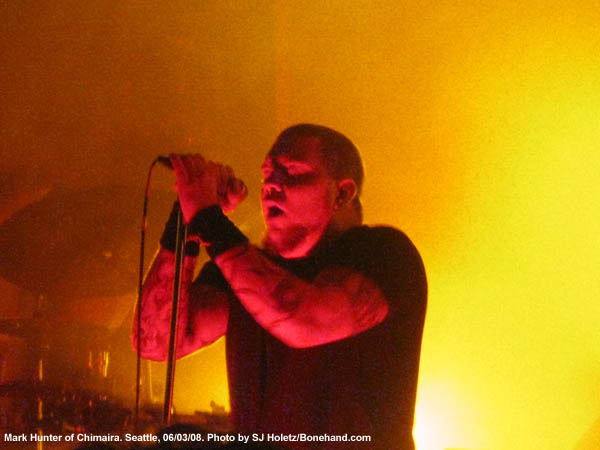 As such, opening duties fell instead to Cleveland’s Chimaira, [Link] [MySpace] who handled the
position with aplomb. Led by the thundering bellow of frontman Mark Hunter, Chimaira tore into the set,
their music chock full of  chugga-chunk metalcore vibe, set apart by the slashing  fretwork of guitarists
Rob Arnold and Matt DeVries, the twisting time changes of drummer Andols Herrick, and a Meshuggah
-esqe bent that keeps me interested. The band's concise yet powerful set did a fine job of whipping the
crowd into a frenzy for the headliners to follow.

Note: Adult Swim can flat throw some money at a tour.  At one point I counted no fewer than eleven
people working on stage during the set change.  I have to say, I can’t remember ever seeing that kind
of manpower working a non-festival metal show.  Impressive, most impressive. 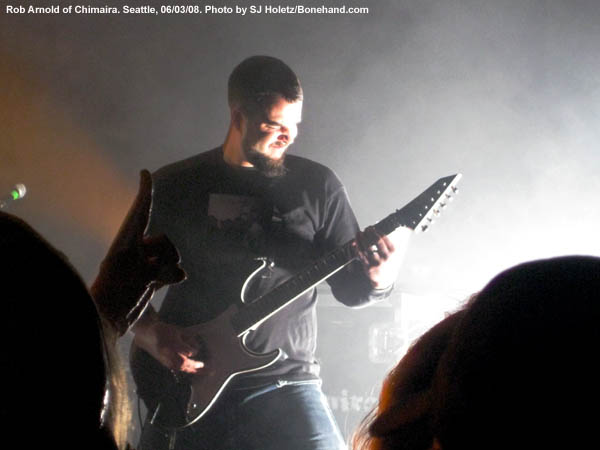 The wait was worth it though, as soon the opening chords of “Deththeme“ filled the air, sending the capacity
crowd crashing against the stage like a wave. It was tremendously cool to hear these tunes in their more urgent live
incarnations, the music crackling with energy as the band ran through fantastic versions of “Briefcase full of Guts”
and personal favorite “Awaken!”, each accompanied with visuals of the animated band, most often in an expanded
vision unique from it’s small-screen counterpart. The videos were more than bloody eye candy however, as they
served to tell a story of ever-powerful band antagonist The Tribunal, and it's efforts to sabotage the concert by
releasing a gas into the audience which would turn them into mutants, thus preventing them from buying
Dethklok's merch. 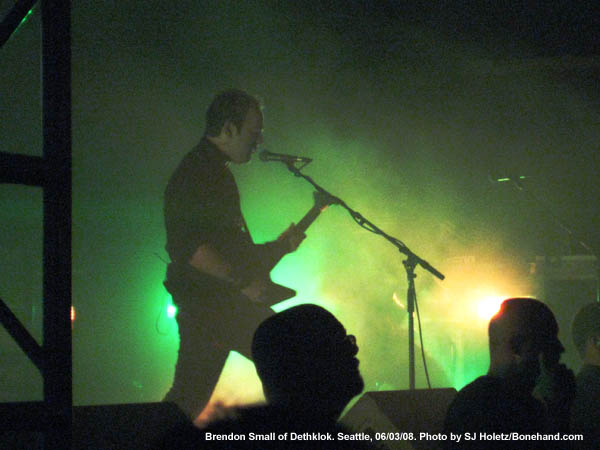 Interspersed through were short videos with titles like “What is Moshing?”, featuring comical asides
from Dethklok mascot Facebones. The live band did a fine job staying in sync with the videos, but as the show
progressed, the lack of spontaneity started to leave me a little cold. In fact, the only point that where Small was
able to deviate from the prepared script was at show’s end, where he cracked a few quick jokes and an amazing
rapid-fire discussion in the voices of ‘Klok members Nathan Explosion, Skwisgaar and Pickles.  It would have
added a lot to the experience to have more such ad-libbing from the comedically talented Small throughout the
show.

Additionally, I would have like to have seen a little more of the live band's personality. While the video
presentation is clearly meant to be the star of the show, it seems like a missed opportunity to have one of the
most amazing metal drummers around on-hand in Hoglan, yet not work in a badassed Pickles drum solo to
feature his talents. 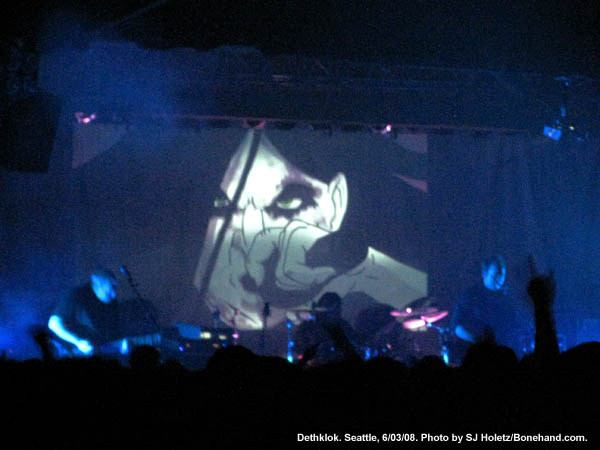 These gripes are minor however, in the face of scorching takes on “Castratikron,” “Thunderhorse”,
and an incredible “Mermaider”, which featured the evening’s most hilariously gruesome video. The band
closed out with an encore of “Go Into the Water” and “Fan Song”, their brilliant guitar harmonies unfortunately
marred by a mistuned instrument. Brutal.

Nitpicking aside, while the show wasn't perfect, I had a great time and would definitely recommend
catching Dethklok [Link] [MySpace] on this unique tour while you can. It's not every day you get to see
a club demolished by a freshly summoned Lake Troll.

Behind The Scenes with Facebones! 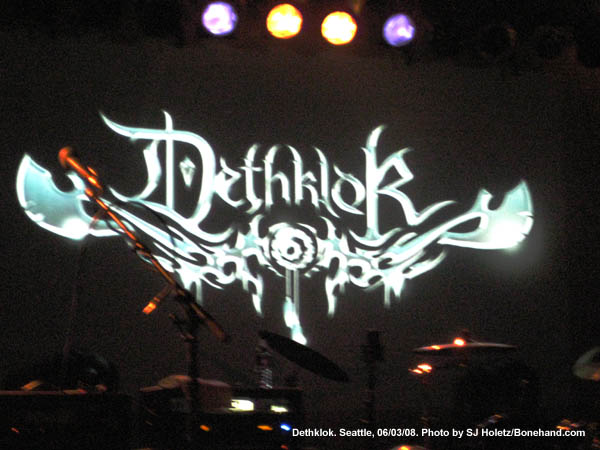