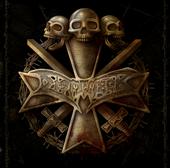 I recently discovered that the soon-to-be-released lastest album from Swedish Death Metal veterans
Dismember could be heard in it's entirety as a streaming preview on mp3.com. [check it out here] Prior to
this, I had hadn't actually heard Dismember, although I was aware that they were contemporaries of personal
faves Entombed. Intrigued, I gave the album a listen, and was shocked to find that I had stumbled upon the
best death metal release of the year so far.

Dismember [Official Site [link]; MySpace [link]] was formed in Stockholm in 1988 by guitarist David
Blomqvist and drummer Fred Estby, who were joined soon thereafter by the roaring throat of frontman Matti
Karki. Estby left the band amicably in 2007, apparently leading to questions amongst some fans as to how
his loss would affect this latest self-titled effort, the band's 8th.

Sonically, these long-time death metal practitioners take the old school gut-bucket rumble of early
Entombed and meld it seamlessly with the incredible duo-guitar harmonies of pre-suck Iron Maiden. True,
there is little groundbreaking here, only the perfect embodiment of the soul of death metal. I have been listening
to Dismember constantly since.

The CD opens with "Death Conquers All", snapping necks early in a furiously crushing statement of intent.
This is followed by "Europa Burns", which moves across the landscape with the implacability of a tank, the riff
ponderous, huge and powerful.

Next up is "Under a Bloodred Sky", no less than a death metal masterpiece. My favorite tune on a
disc of amazing quality, "Under a Bloodred Sky" races around the room in thrashy abandon. After an amazing
solo, a bass lead segues into a Maiden-esque harmony breakdown, culminating in a note bend at about
4:52 that is so simple and yet so awesomely sublime that it sends chills up my spine. This is a band that
just fucking GETS it. Fantastic.

But even as you still savor the last notes of the previous awesome tune, along comes "The Hills Have
Eyes", a head crusher that out-Entombed's Entombed at their own game. The sequencing here is perfect.

Then we get a couple of satanic shout-outs reminescent of The Crown (RIP), in the excellent
blackened thrash of "(We Are) Legion", and "Tide of Blood", the latter alternating melody and weight in a
Golden Ratio of carnage: This is death metal exactly the way its meant to be. Awesome line:
"We are your fucking overlords!" Indeed.

"Combat Fatigue" gives us another top notch speedball, followed by the queasy bends and crunching
power chords of the "No Honor In Death", before "To End It All" picks up the tempo once again with
repeated shots to the cranium. The album closes out in masterful fashion with the stuttering death 'n' roll
crunch of "Dark Depths", and the sinisterly atmospheric intro which leads to the anthemic "Black Sun",
a crushing tale of evil "lying in wait beneath the polar ice".

Through it all, Dismember is never at a loss for another catchy riff, another epic moment. It's simply a
blast to listen to, and an excellent example of a veteran band at the pinnacle of their craft. I have spent far too
long not listening to this band, and I can't state this strongly enough: I love this fucking CD. Dismember
goes on sale in the US on 4/1/08, and I for one will be there cash in hand. BUY ONE!
``````````````
Copyright  2008 S J Holetz