For those of you interested in attending the BoneBat Film Fest click here. Don't let our package prices dissuade
you! If they sound steep, why not try clever methods of making money, such as launching a lemonade stand
business, selling baked goods, or getting a tax deduction if you wanted to donate car and truck parts and
even the vehicles themselves! 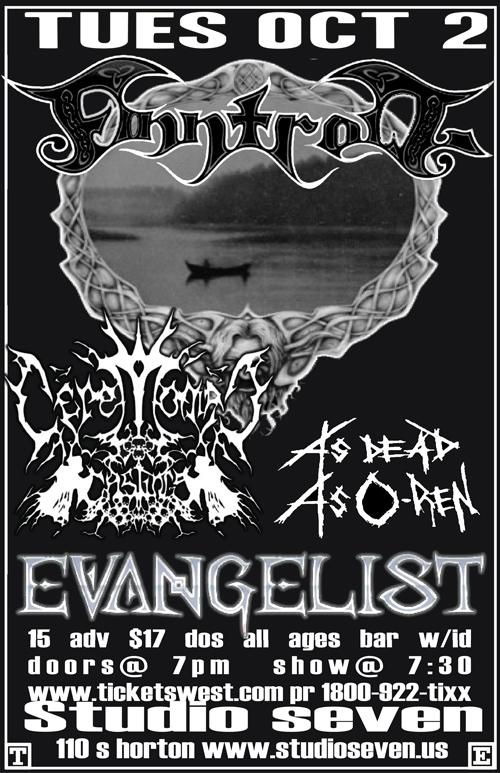 With Ceremonial Castings, As Dead As O-Ren, I Rot and Evangelist.

It was Metal Night once again this week, as I headed out to catch the mighty Finntroll who, touring
in support of latest release Ur Jorden’s Djup, were making their first-ever Seattle appearance. As I stood
in the cutting wind awaiting the opening of Studio Seven’s doors, my eyes turned to the roiling grey sky
above, and suddenly, the ground cracked open behind me, the earth belching forth the sulphurous black
breath of Trolls on the hunt.

Or maybe that was just the dumpster I was standing in front of.  Either way, the doors soon opened
and I escaped the chill to catch the first of four local acts who would precede the headliner on this night.

First up was Evangelist from Seattle, the band’s five members laying down a brand of old school
thrashy death not unlike Under the Blade era Defleshed, a style I dig completely. Fat, crunchy twin guitar
riffage and solid songwriting served the band well, as vocalist Bobby did his best to galvanise the lukewarm
early crowd. I look forward to catching this act in the future. 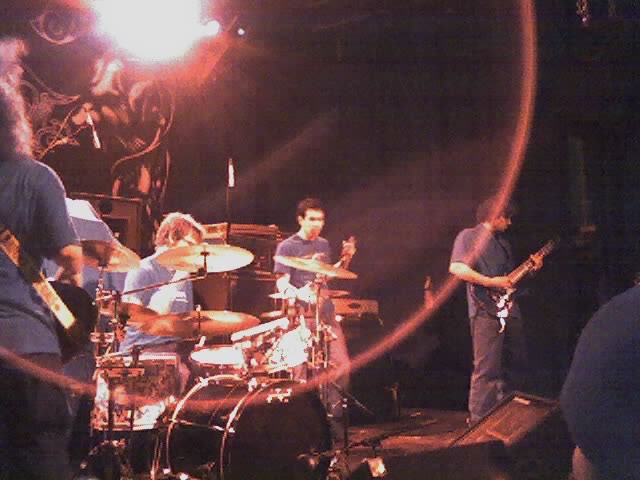 Evangelist was followed by Seattle death-metal four-piece I Rot, guitarist Zach and bassist spitting
out a sound crunchingly Haunted. I wasn't taken with their first few numbers, the riffs sounding muddy
and generic, but the band won me over by sets-end, largely due to sheer balls-out effort, and the
self-deprecating style of vocalist BJ:

“Go to our myspace page. You can learn about us and shit. And buy our cd Kill Everything.
Which we don’t have here. Because we're lame” (shrugs)”

The band closed out strong behind neck-snappers “Whoregun Grinder” and “Kill Everything”, tripling
the mosh pit in no time flat. Definitely worth a second listen. 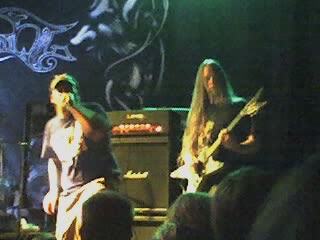 Tacoma’s As Dead As O-Ren hit the stage next with their tech-metal offering. Guitarist "The Violator"’s
frantic fingertapping intertwining seamlessly with the impressively complex rhythms of drummer Bobby,
as vocalist “Sunshine the Werewolf” did his best impression of a connecting modem. Despite the notable
musicianship and attempted brutality, the band’s songs carried no weight, either emotional or physical.
Some of this may be due to a lack of a bassist, a case of tendonitis leaving one Cornelius Von Thunderclap
ample free time to repeatedly bodycheck me in the back from the sparse pit as I attempted to assess his band.

My verdict: Loads of potential, but songwriting-wise, a little mas carne’ sonico is needed underneath those
gleaming technical exoskeletons. 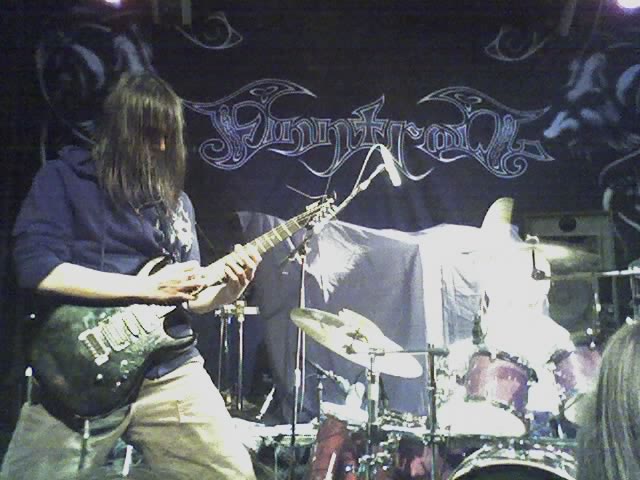 After O-Ren, I found myself aching for some actual showmanship, and Battle Ground’s Ceremonial Castings
did not dissappoint, as the mightily bristling Lord Serpent was giving lessons in that shit. The band hit the stage
amidst a cloud of dry ice and sickly red light, brandishing their ensorcelled weaponry and banging their battleaxes
on the boards. Then the room exploded with a blackened hellblast that wasted no time in knocking me back into the
proper headspace for the forthcoming carnage. Thanks fellas, I needed that. Lord Serpent soon had the room
under his sway, his buzzsaw guitar in unholy alliance with the sinister symphonic stylings of keyboardist Old Nick
and the blasphemous beats of the bludgeoning Bloodhammer. Memorable incantations included “Into the Black
Forest of Witchery” and a scorching “Come Forth …Damnation.” Unfortunately, their evil had faded into the night
before I got back to the merch table, but I will be picking up some of this band’s recorded mayhem directly. 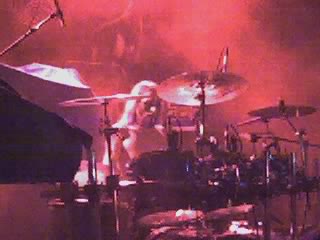 At last, as the house lights dimmed to the opening strains of the latest album’s intro “Gryning”, the kilted
and warpainted headliners took the stage. Finntroll then tore into opening number “Sång” kicking off a generous
21 tune set that was packed with favorites, but still somehow felt too short. For the uninitiated, Finntroll’s
music is a unique cross of black metal and Finnish “humppa” folk music, with lyrics ripped from finnish legend
and sporting a trollish point of view. As the name connotes, the band hails from but sing in Swedish
because, as the story has it, “Swedish just sounds damn trollish.” The resulting music can be compared to
death metal Danny Elfman: brutally heavy yet nimble and joyous, that is if rollicking tales of trolls feasting
on human flesh is your idea of joyous…heh heh heh. 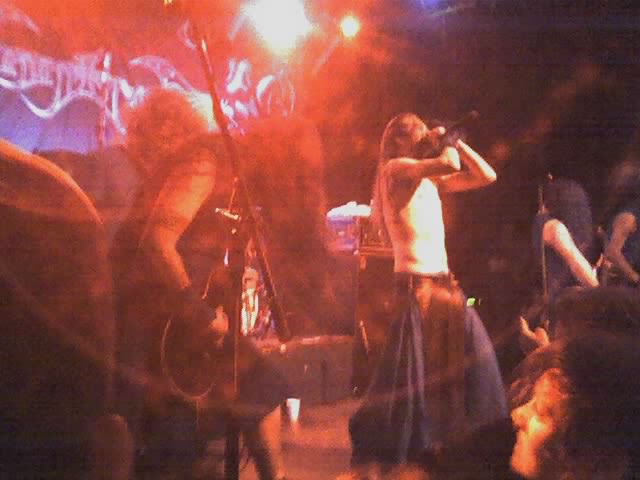 Racing through raucous versions of “Fiskarens Fiende”, “Jakten’s Tid”, and personal fave “Kitteldags”
(“You know what we do with Priests? WE EAT THEM!”),  guitarists Skrymer and Routa and touring keyboardist
Virta propelled the melody while the complex “hummpa” rhythms were locked in tight by bassist Tundra and
drummer Beast Dominator. By the time the band hit an awesome "Trollhammeren", the floor was stomping and
fistpumping in trollish glee. From that point FRAM!, vocalist Vreth owned the crowd, exhorting them in riotous
call and response.

The band continued their procession of epics with the crushing tribute to a mighty Goblin
King in “Aldhissla” before culminating the set in a fantastic version of the bizarre country/metal hybrid
“En Mäktig Här” and a devastating “Det Iskalla Trollblood”.  A quick breather for a few thunderous chants
of FINN! TROLL! FINN! TROLL!, and the band was back for brief yet satisfying two song encore, before the
trolls escaped into the night, leaving the crowd grinning and exhausted. In closing, an excellent show,
I eagerly await Finntroll’s next annihilation of . A word of warning though: this tour is a short one,
so don’t dick around or you’ll miss your chance to catch this incredible band live.