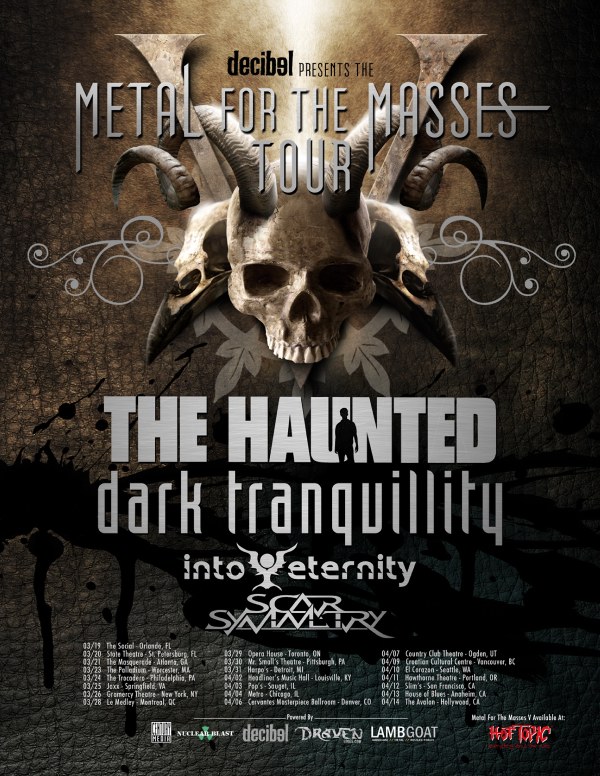 The Haunted and Dark Tranquillity, with Into Eternity and Scar Symmetry.


Once again this week, I descended upon Seattle for the all too typical Tuesday night metal
show. Why is it that every decent-sized metal act that comes through town feels the need to play
SF or LA or Chicago on the weekend, so that Seattle gets dicked with these mid-week shows?
Sure, I could have travelled to one of the weekend shows, but then I'd have to pay for a plane ticket
and find hotels in Chicago , or try to find a bed at one of those SF hotels. No thanks. As an
aging metalhead, this pisses me off to no end, but not so much that I won't pry myself out
of my lair for a lineup like this!

I had caught an abbreviated set from faves The Haunted at Ozzfest in 2005, where they
savagely ripped a hole in the mid-morning crowd, so getting out to catch a full set was a must.
Not to mention the bonus that they were co-headlining with Dark Tranquillity, one of the most
prolific and influential of Swedish death metal acts. No way I miss this one, so work night be
damned, I took my griping ass downtown for the gig.

Sweden's Scar Symmetry [official site, myspace] would kick off the evenings proceedings, their
music a heady brew of melody and crunch not dissimilar to that of fellow countrymen Soilwork.
Their set was highlighted by choice guitar work, and notable dual vocalist interplay between guitarists
Jonas Kjellgren and singer Christian Allvestam, whose complementary powerful roars are the perfect
counterpoint to the strong clean choruses from Allvestam. Above all, however, it is the songwriting
craftsmanship of Kjellgren and second guitarist and secret weapon Per Nilsson that really sets this
band apart. One standout song followed another, with "Chaosweaver", "Mind Machine" and the
spectacularly catchy "The Illusionist" sending me sprinting to the merch tables at sets' end.

Next up was Saskatchewan five-piece Into Eternity [official site, myspace], who put in a solid
if not particularly memorable performance. Definitely victims of following a superior Scar Symmetry
(on this night anyway), the majority of tunes on display from Into Eternity were made up of too many
second string riffs, the excellent "Beginning of the End" and "Timeless Winter" notwithstanding. I must
give props to singer Stu Block, whose powerful pipes hit those Dickinson/Halford type wails in a
manner which you don't hear enough these days outside the realm of sorry-ass power metal.

Cool Metal moment: As the road crew prepares the stage for Dark Tranquillity's set, a bearded
gentleman in a black metal T and olive jams who I take to be in charge of things is setting up
the guitar gear directly in front of me. His movements show an efficiency which speaks to having
performed the task a thousand times. Judas Priest's "Hell Bent for Leather" is rocking the PA, and
at the exact same moment, the guitar tech and I both bust into:

"From a streak of fire AS HE STRIKES! Hell Bent! Hell Bent for Leather!"

We both laugh, and the guy says: "Every day, man. Every day." An awesome moment of
metal solidarity. Classic!


Soon, Dark Tranquillity [official site, myspace] took the stage to the opening strains of new
track "Terminus", with vocalist Mikael Stanne immediately taking command of the stage and
working the crowd like the seasoned pro he is. Dark Tranquillity's complex musical creations
were performed with precision and panache, propelled by the pulsing bass of Michael Nicklasson
who stalked spider-like about the stage, as drummer Anders Jivarp interspersed amazing cymbalwork
with his machine-gun drumming. The guitar heroics of axemen Niklas Sundin and Martin Henriksson
were notable as well, particularly during the flashy older numbers such as "Punish My Heaven" and
"Hedon." DT's set was brilliant, my only complaint being that since new CD Fiction would not be
released for a few more weeks, I would have preferred a few more familiar old favorites such as
"Lethe" or "Zodijackyl Light" included in the short set. But that's nitpicking, isn't it?


Finally, The Haunted [official site, myspace] took the stage to close out the evening, punishing
the crowd with their punkier brand of death metal. Guitarists Anders Bjorler and Jensen carved out
huge slabs of their signature heavy riffage, providing the perfect brutal backdrop to the screaming
Peter Dolving's tales of rage and pain and fear. I am hard pressed to think of a frontman working
today who pours more of himself into a performance than Dolving, as he literally wrings himself out
on stage in every performance, truly stunning. The Haunted's set was concise and powerful, and heavy
with numbers from latest work The Dead Eye, effortlessly whipping the crowd into a frenzy with
electrifying renditions of "The Medication", "99", "All Against All" and the crushing "Hate Song".

The band finished with a cathartic "Bury your Dead", and as I headed toward the exit, I passed the
sweat-drenched Dolving, who was staggering through the crowd a conquering hero. Despite his obvious
exhaustion, he was still giving to his fans, taking the time to distribute high fives and handshakes. I
offered up my thanks as I passed, taking with me into the cool Seattle night my appreciation of a band
who works this hard for their audience.

The Haunted Set List
The Premonition
The Flood
The Medication
99
Abysmal
In vein
D.O.A.
The Drowning
Trespass
The Reflection
All Against All
The Guilt Trip
No Compromise
The Fall Out
Hate song
Dark Intentions
Bury your dead