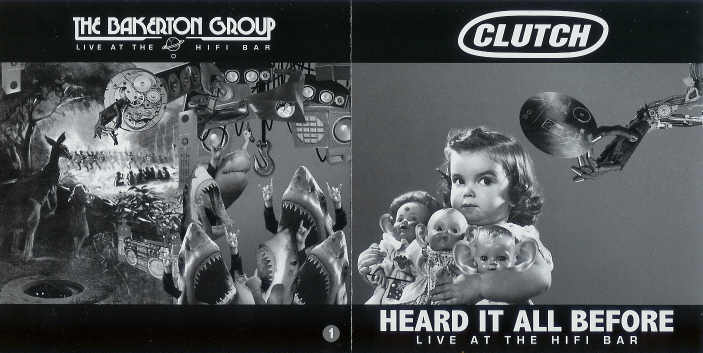 CLUTCH – HEARD IT ALL BEFORE

This week, I stumbled across an announcement on the Clutch Pro-Rock Site [link] regarding a fresh
new live offering, so I immediately fired off my hard-earned. Since I could find precious little on the interwebs
about the release prior to making my purchase, I wanted to bust a review for all my Clutch lovin' brothers
and sisters but pronto. Here's the scoop:

Heard It All Before was recorded live in Melbourne AUS on December 13th, 2007. The two full sets of
"An Evening with Clutch" were recorded at the event, and the CDs were available for purchase immediately
thereafter, an excellent souvenir of the evenings festivities.  It's a solid recording, with frontman Neil Fallon's
vocals especially clear and forward in the mix. Instrumentally though, the recording is a bit bass heavy, robbing
Tim Sult's guitar sound of much of it's crunch.

To me, one of the main selling points for THIS double CD was the inclusion of the opening set from
The Bakerton Group (Clutch minus Fallon, for the uninitiated), something that was missing from the previous
Live In Flint set. The first four tracks are brand-new, badass instrumentals from Bakerton, all in the jammy vibe
you know and love, alone well worth the price of admission.

The two sets featured here are heavy with tracks from Robot Hive: Exodus and From Beale Street to
Oblivion, so the fan definitely gets a nice change up from 2005's Live At Flint. High points on the first disc
are the Bakerton Tracks, a scorching rendition of "You Can't Stop Progress", a Harmonica drenched version
of "Slow Hole to China" and an AMAZING run at "The Soapmakers", which culminates in an excellent JP Gaster
drum solo before seguing into "Burning Beard". The first disc closes out with loose, jammy, almost languid
versions of Big News I and II.

Disc Two kicks off with a cool cover of John Lee Hooker's "Burning Hell" followed by a new track (to me,
anyway) called "King Of Arizona" (I think). Other faves on this disc are killer takes of "Mr. Shiny Caddilackness",
"The Promoter" and "Of Mice and Gods"

The only negative that I noticed on Heard It All Before is one of overall energy. Maybe it's the
aforementioned bass heavy recording, or how the stage and crowd were miked, but the
audience comes off weak, failing to give it up in a manner befitting one of the mightiest bands in rock.
I can’t help wonder if the mellow crowd reaction didn’t affect the band somewhat, leading to older scorchers
like "Texan Book of The Dead" and "Shogun Named Marcus" coming off a half-step slow. I can attest that these
songs are both electrifying crowd-pleasers live, but that is not conveyed on this recording, and comparative
listens to the versions on Live At Flint bear this out. Whatever the reason, even "Electric Worry" didn’t sound
as crushing as it should have.

That aside, an entire Clutch show for $10 is one hell of a steal, and you don't get much fresher than
two month's old when it comes to live recordings. How essential it is for you would depend on how well you like
the last couple of albums. For me, it's a must-have addition to my collection, an excellent counterpoint
to Live At Flint, and far superior to the older Live At The Googolplex. I understand this is a limited edition
though, so snag one while you can, as it won’t be around long.


For further Clutch reading, Click [HERE] for a Review of 2004's Blast Tyrant.