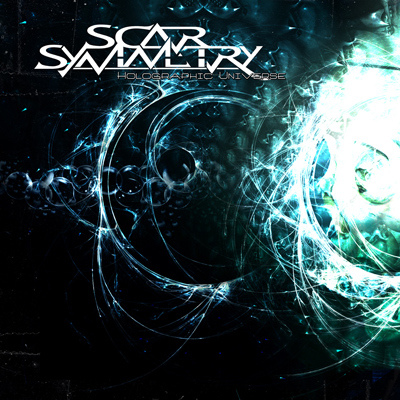 In the interest of full disclosure, I’m pretty much in the bag for Sweden’s Scar Symmetry. Having
caught the band on last year’s Metal for the Masses tour, I was immediately taken with their ability to
combine sweet melody with brutal crunch. I dig this band for the same reason I love good Thai food: it’s
all about the contrasts. Hot and sour, salty and sweet all combining in a resulting dish far greater than the
sum of its parts. On their first two releases, Scar Symmetry [Home, MySpace] accomplished the same
musically. Could they make it three straight?

Holographic Universe rockets out of the gate with “Morphogenesis”, continuing the band’s penchant
for ultra-catchy openers. The band arms the track with two top notch solos and a chorus destined to lodge
itself in many a cranium. It is followed by the slower paced if equally catchy “Timewave Zero”, and the
raging intro of “Quantumleaper”, perhaps the heaviest tribute to a Scott Bakula vehicle in music history.
Or not. Either way, this track is notable for its nimble solo and King Diamond-style vocal line in the pre-
chorus, an extremely cooltouch echoed a few songs hence in the schizophrenically driving, then mellow
then driving again “Missing Coordinates.”

Next up, the crunching riffs that lead into one of my faves, “Artificial Sun Projection”, its heavy
initial chords detour around a cheesy verse, before returning for a monster head-banging chorus.
“Ghost Prototype 1” features a series of skittering guitar lines that converge at a stuttering Meshuggah
breakdown midsong. Very cool.

I have mixed feelings about the ambitious “Fear Catalyst”, which begins with a roar and then
alternates lightweight vocal moments with a badass solo, some more Messuggah-esque riffing, and
an unmistakable nod to Arch Enemy come chorus time. Parts of the song are damn cool, but as a
whole the experiment never really gels.

The band clears the palate with the straightforward rocking of “Trapezoid”, and the futuristic
flavor of “Prism and the Gate”, setting the stage for the sprawling 9 minute title track, which thunders
with epic sci-prog grandeur.

Then comes “3 Dimensional Shadow”, another track with a too sweet pre-chorus, but subtly
shifting riffs and a brutal verse are the real treat here. The cd closes out with the "Ghost Prototype 2",
which alternates balladic sections with chunky shredding, another great chorus, and a final soulful solo.

There’s a lot to like here, as Scar Symmetry’s strengths are evident throughout. To whit,
Christian Alvestam’s amazingly varied vocals, tremendous guitar work from Per Nilsson and Jonas
Kjellgren, a load of great classic metal soloing, and the band’s excellent, musically adventurous
songwriting. The band stretches and takes chances here, and while they don’t always pan out, it’s
never a boring listen. Most importantly, SS are never at a loss for another cool riff, so much so that
many are used once and discarded, left to be discovered by the listener like a $20 on the sidewalk.

The only imperfections that mar this gem are a series of pre-chorus vocal melodies that stray
uncomfortably past sweet into “Feelin’ 7 Up” commercial jingle territory, and a bit of clunky ESL
in drummer Henrik Ohlsson's lyrics. Admittedly, I have no business acting as the world’s grammar
monitor, but if you are going to sing in English, please have someone proofread your work. Case
in point: “The Illusionist” from 2006’s Pitch Black Progress is still my favorite Scar Symmetry
song ever, but I feel like a frigging idiot singing “Those who call me avatar, knows not what
they’re looking for” out loud.

Seriously guys, next time, email me, I’ll be glad to look the lyrics over for you.

So there you have it. On the whole, Holographic Universe is absolute ear candy for lovers of
supremely melodic death metal. It's not perfect, and Scar Symmetry may not appeal to those
who need their music all-brutal, all the time, but I for one will be listening to this one all summer.
Check it out. 8/10