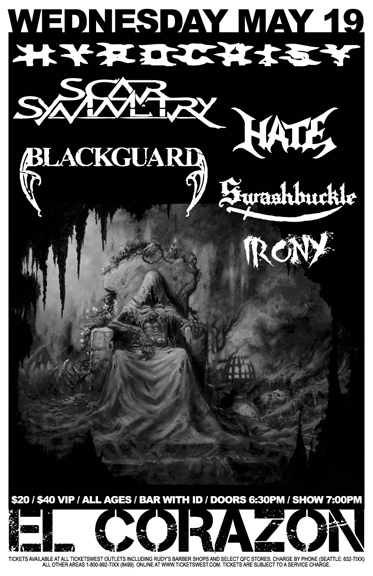 
If there is one thing I hate, it's a tour cancellation. After a decade of fandom without ever seeing them live, I was pissed
beyond all reason when Hypocrisy were forced to drop off their tour with Ensiferum last December, a mere 4 days before they
were due to take the stage in Seattle. (See Episode 36 of The BoneBat Show for more griping on that front). Hell, I'm STILL salty
about the cancellation of 2006's Northern American "Masters of Death" tour, the result being that I still haven't been able to catch
Entombed, Dismember, or Grave in concert. So when Hypocrisy rebooted by announcing their "Taste of Extreme Divinity" tour,
I was well fired up. Not only would Seattle get a makeup date, but this time it would be with Hypocrisy as the headliners! And
with personal faves Scar Symmetry added as a bonus! El Corazon, [Link] here I come. 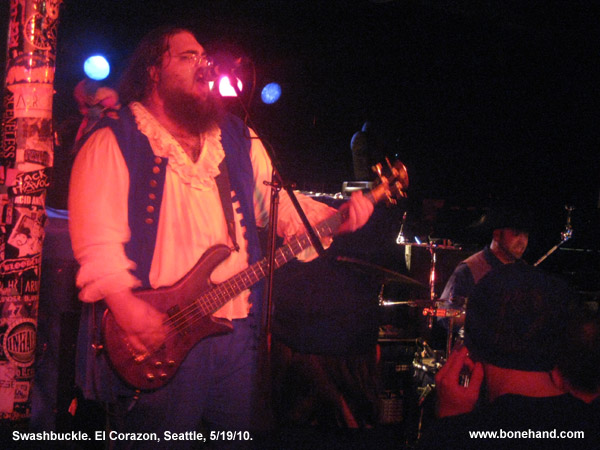 Just to keep things consistent, I missed blackened opening act Irony [MySpace] (sorry fellas, maybe                                         next time), arriving mid-Arrrr! for the start of Swashbuckle's set. Hailing from the barbaric coast of New Jersey,
Swashbuckle [MySpace] deliver their own brand of thrashy pirate metal, stylishly presented in full buccaneer
regalia. Frontman/bassist Admiral Nobeard sells it hard, eyes bugging as he mixes his pirate and gangsta
metaphors in his brilliant between-song exclamations: "I want to see you tear it up in the pit, Seattle! Fuck
bitches, get money!" The band ripped through their short set in raucous abandon, tunes such as "Cruise Ship
Terror" a straight shot of riotous fun. Rarely is this much ass kicked by a mere six boots.

Now for something equally piratical but completely different: Montreal's Blackguard [MySpace]. Also
veterans of Hypocrisy's previous no-show, I was already familiar with their alchemical blend of metals both power
and death, having even picked up their latest CD Profugus Mortis. Once again Blackguard put on a tremendously
high-energy set, anchored by the impressive shredding of guitarists Terry Deschenes and Kim Gosselin, and led
by Paul "Ablaze" Zinay, a frontman the likes of which hasn't been seen since Bruce Dickenson. He swarmed
the boards, careening off band members and even fans heads during raging versions of "The Sword" and my
current beer-drinking favorite, "This Round's on Me". The stage strained to contain the band, and "Ablaze" even
countered the good Admiral with a little comedy of his own: "...And I'd like to thank our brothers in Alestorm...
Errr, Swashbuckle!" Hilarious! 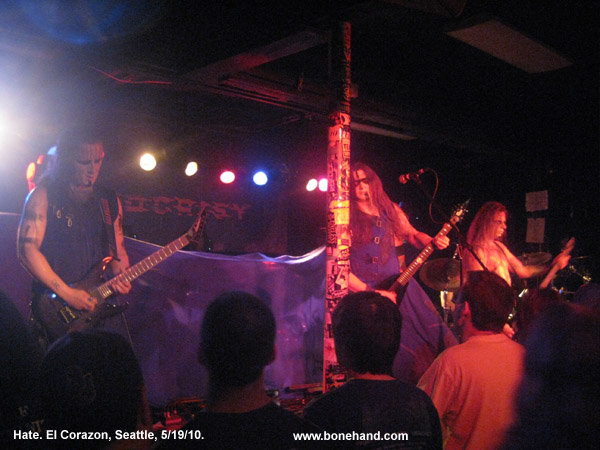 Note to self: When you finally form that blackened death metal band and take it on the road, DO NOT FOLLOW
BLACKGUARD! That was the unfortunate position Poland's Hate found themselves in, and I didn't envy them, as no
amount of corpsepaint, funerary gowns and capable riffing could overcome the manic energy of the previous band's
effort. Hate [Home, MySpace] gave it their best shot, with convincing glowers and a solid batch of evil hymns, but
on this night, their set was somewhat less than mind blowing. The tune "Hex" is badassed though.

Hate's hellish cacaphony soon gave way to James Brown as the stage was reset for the next band, and
back at the merch table, "Ablaze" and Admiral Nobeard wasted no time getting funky to the Godfather of Soul,
freaking priceless. 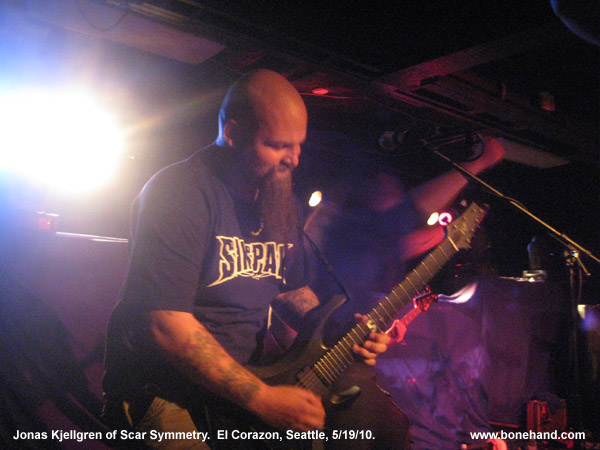 I first heard Sweden's Scar Symmetry on the 2007 tour "Metal for the Masses" (reviewed HERE) and was
immediately impressed by distinctive fusion of melody and brutality. I had long been looking forward to hearing
them once again, and they did not disappoint. New dual vocallists (Lars Palmqvist, cleans and Roberth Karlsson,
growls) more than held their own in the shadow of former vocalist Christian Alvestam, belting out old favorites
and new cuts with equal assuredness. Meanwhile, guitarists Jonas Kjellgen and Per Nilsson coaxed a stunning
array of sounds from their six-strings during such gripping cuts as "Morphogenesis" (from Holographic Universe),
"Chaosweaver", and "Artificial Sun Projection". By the time Scar Symmetry [Home, MySpace] closed with a
monster rendition of "The Illusionist" every first was held high. They even fixed the lyrics in the chorus on that
one, bonus! Excellent set, gentlemen. Great to see you again. 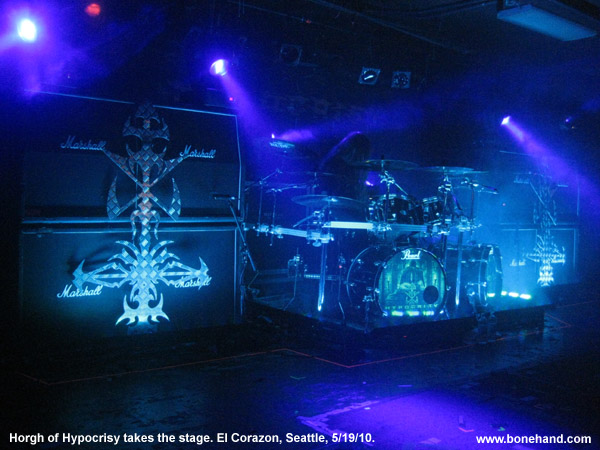 Finally, the stage was drenched in fog and blue light, and Sweden's Hypocrisy hit the stage, gutting
the crowd with strobes and the vicious opening riff to "Valley of The Damned". Equally at home with scorchingly
evil black metal scrapes and ponderous sonic monoliths, the veteran death metal act proceeded to grind through
90 minutes of favorites from throughout their glorious 18 year career. Hypocrisy mastermind Peter Tagtgren's
already epic guitar tone was fattened exponentially by the presence of touring guitarist Tomas Elofsson
of Sanctification. [MySpace] 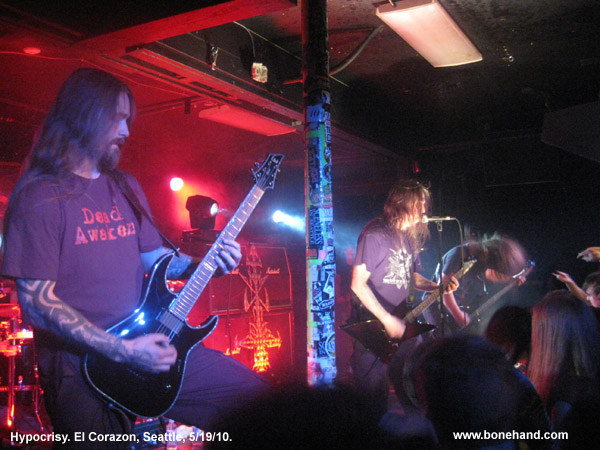 As is their trademark, Tagtgren and Co. fully exploited their ability to carve up epic distortion
as a sculptor does stone, their Wall of Marshall blasting tones not so much loud as huge during such
cuts as "A Coming Race", "The Final Chapter" and of course "Roswell 47". This contrasted nicely with the
band's speedier buzzsaw numbers like "A Killing Art", "Warpath" and the "Pleasure/Osculum/Penetralia"
medley, in which drummer Horgh's thundering blastbeats and Tagtgren's trademark paint peeling howl
were in fine form. 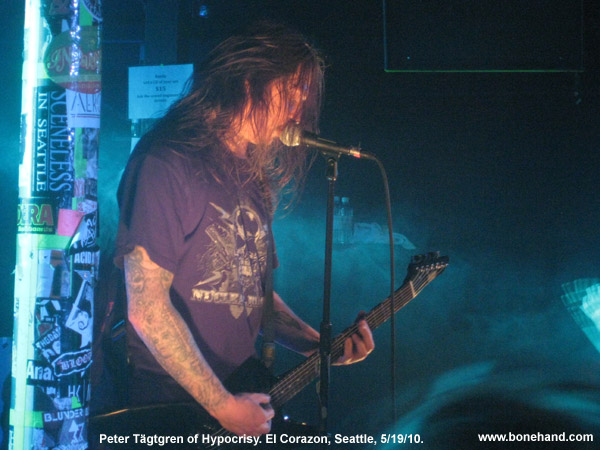 On this night, Hypocrisy's [Home, MySpace] performance sounded magnificent and was visually
mezmerizing, cementing this night's status as the most fun I've had at a show so far this year. It's a damn
shame so few of my Seattle metal brethren were there to witness it. Elsewhere however, the tour runs for a
few more weeks, so don't miss the boat.

Or Pirate Ship, as the case may be. 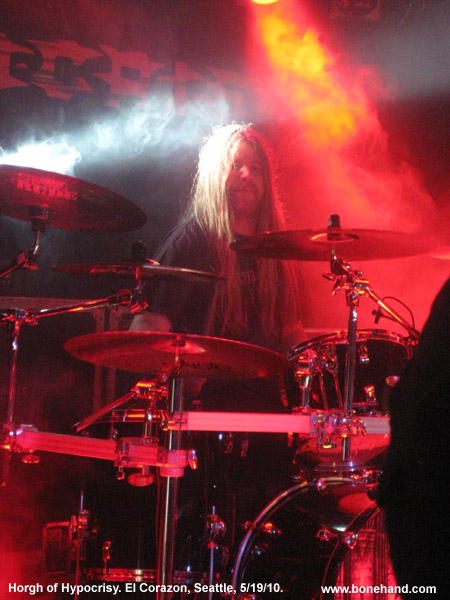 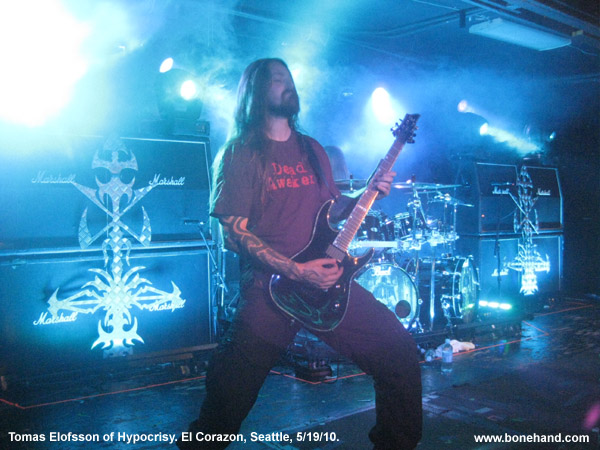 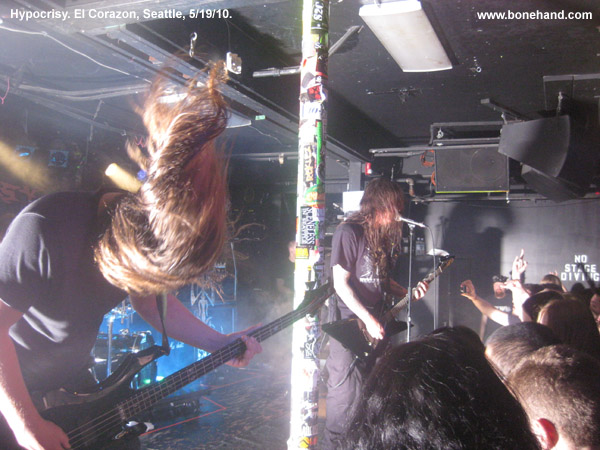