I Rot, with Sikend and Burning of I.

Having discovered Seattle's I Rot last year in support of Finntroll, I had been long been
looking foward to catching them again since the of addition second guitarist Jeramee Green, curious
how the change would impact their sound. Unfortunately this summer, broken bones, family vacations
and postponed tours had conspired to thwart me at every turn. Things looked bleak last week when
the mighty Zimmer's Hole were forced to postpone their US tour, but despite this black turn of
events, the remaining bands on the bill stood determined to deliver the goods to the hometown faithful.

First up this evening, Duvall WA's Burning of I [link]. I first heard their act a few months ago
at this very venue, and was immediately impressed by the band's seemingly endless supply of high
quality riffs, and the patience to spend the time exploring them. 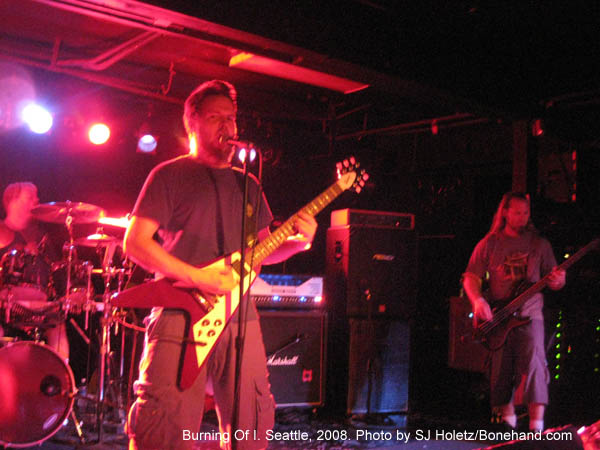 It was great to see them once again in an expanded set, their sound incorporating the
sprawling constructions of Mastodon, the groove of Clutch, with the epic feel of an Amon Amarth,
combining these disparate styles into a unique, cohesive and galvanizing whole. 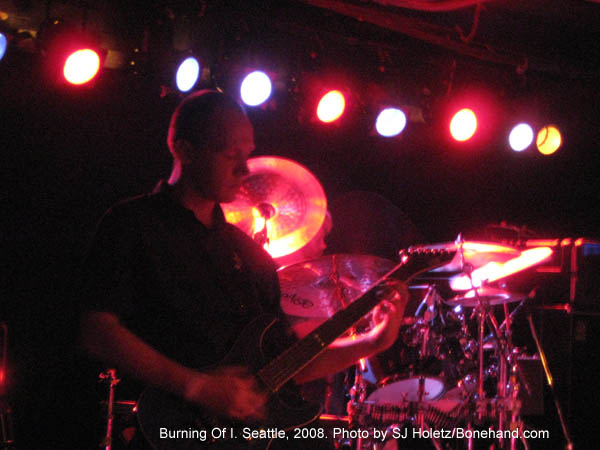 Matt of Burning of I

The band worked through the 5 tracks of their current demo to excellent effect, "Party Charge" and
"Nougat" rapidly becoming personal faves, before tearing into a couple of new tracks. The first of the two
kicking off with a mellow spacey intro and clean vocals from Jake, before slowly building to a huge
headbanging crescendo, leading BJ of I Rot to dub the song simply as "Fuck!". This was followed
by the concisely crunching "Spewnicorn", which closed the set out in fine fashion. 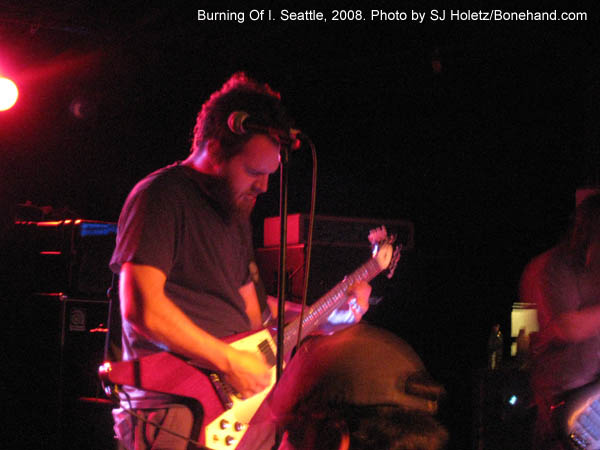 Jacob of Burning of I


Now for something completely different: Everett's Sikend [link], their live vibe reminding me of
what Fear Factory might have sounded like if they had been more influenced by hip hop than industrial.
The band powered through a few early set technical difficulties before they got down to rocking the
place in earnest, bludgeoning the sparce crowd with their dense 7 stringed mayhem. 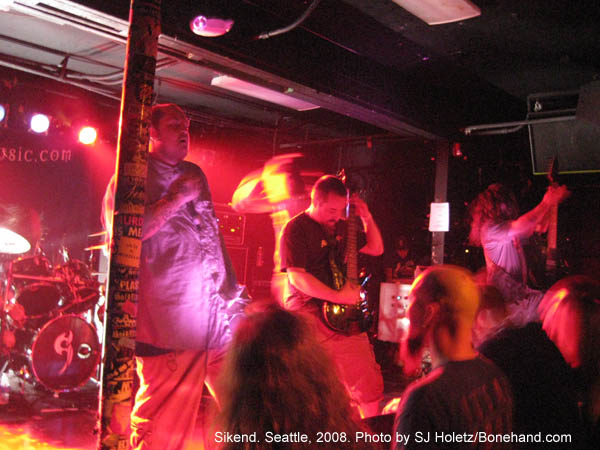 A high point of the set was a raging take on the tune "Anger Displacement", the band joined
on guest vocals by a friend who was celebrating his birthday, a cool personal moment. 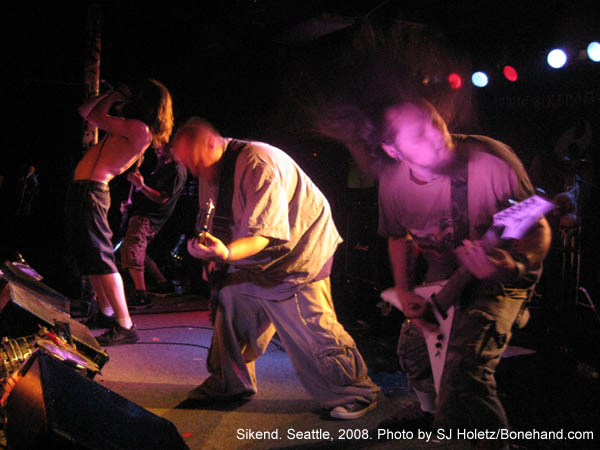 Then finally, I Rot [link] took the stage, and I'll be damned if it wasn't  worth the wait. The band
opened with a pair of cuts from Kill Everything, new guitarist Jeramee joining Zach to provide
an even more intimidating platform for BJ to bellow his tales of human pain, mayhem and murder. 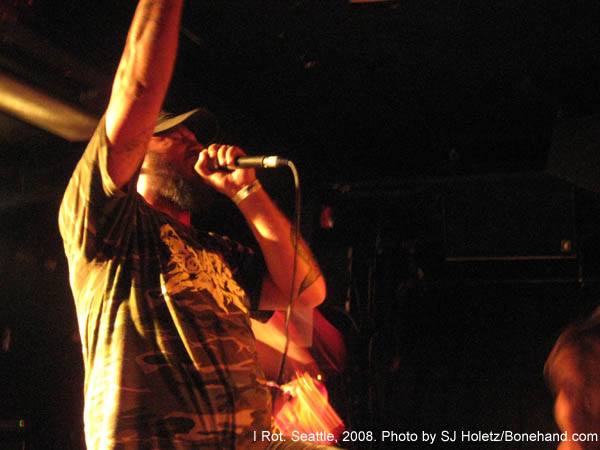 BJ of I Rot

This, combined with Chad's thundering bass and Aubrey's brutal drumwork resulted in a sound as
grimey and Haunted as ever, but with a ton of added bite and power. 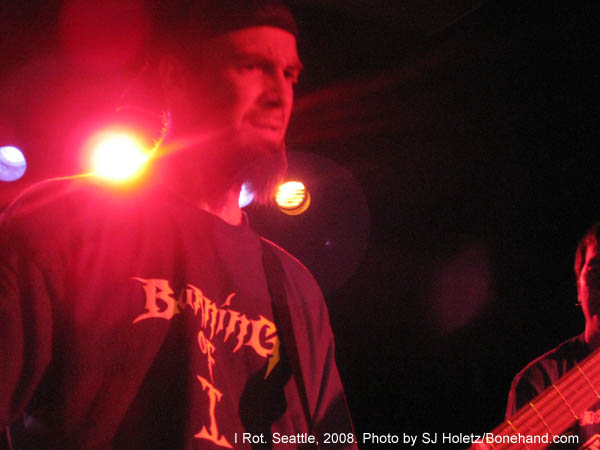 Chad of I Rot

High points for me were punishing new track "I Was Sent By God", the scraping "Whoregun
Grinder", and the always killer "Death Merchant". 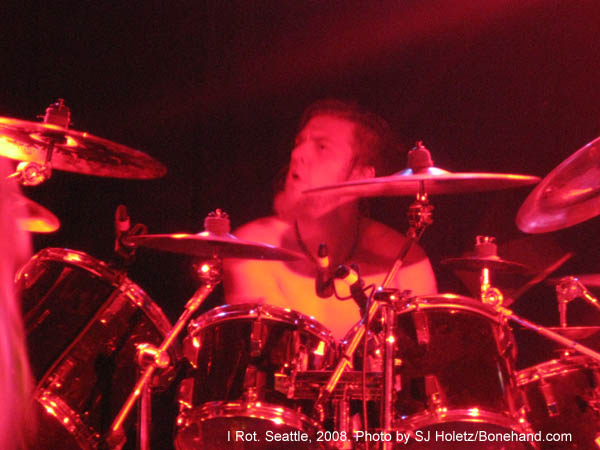 Aubrey of I Rot

Smoking versions of "Kill Everything" and recent  neck-snapper "Can You Tell?" brought the
night to a crushing close. Well done, and suffice it to say that if I had any sort of  journalistic integrity
left regarding this band after featuring them twice on The BoneBat Show, it was obliterated by the
much appreciated shout out. 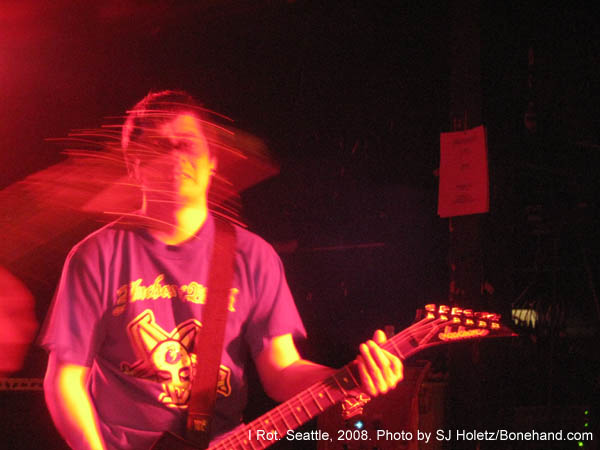 Jeramee of I Rot, with his patented "Halo of Hatred"

In all, this was a great night of varied and heavy local metal. And judging from the attendance,
you were probably at home on your computer  looking up QR code software, giving your
search engine a workout. Best of luck with the whole create QR code images thing...
but you missed out. 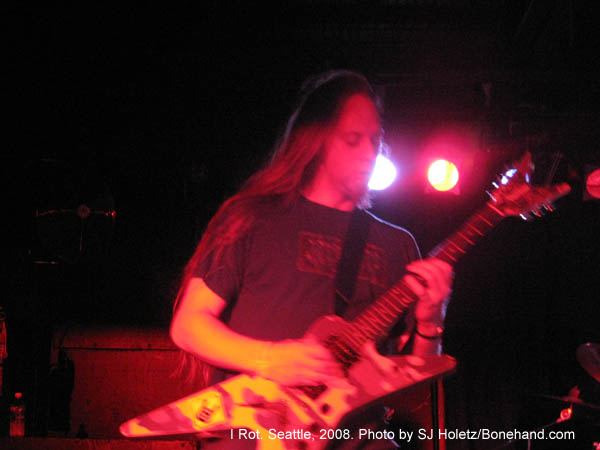 Zach of I Rot

I ROT
Hell Has Come
Andrea's Daycare
The Most Horrible
Vicarious
Violence in Human Form
I Was Sent By God
Whoregun Grinder
Death Merchant
Kill Everything
Can You Tell?


Any mistakes in the setlists are mine and mine alone. Please email any corrections to steve@bonehand.com 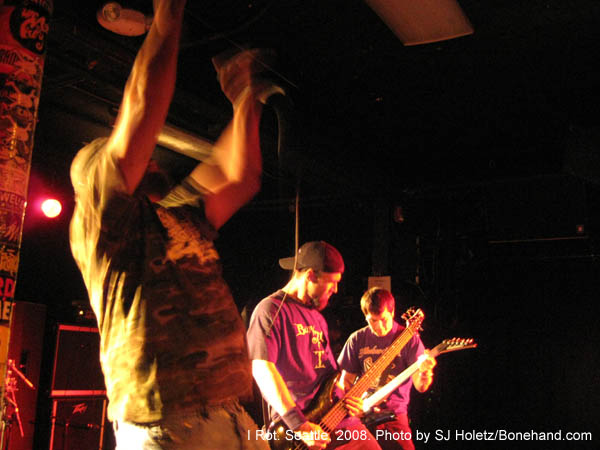