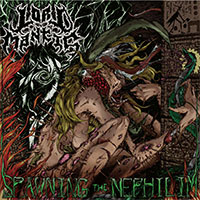 
Since stumbling upon The Makai's bad-assed CD The End Of All You Know last year (Thanks Pinto Gigante!), I have been keeping an eye on new
releases from Seventh Rule Recordings.. When I saw that the label was releasing the debut from the new band of former Nachtmystium guitarist Drew
Markuszewski, I was immediately interested.

Despite the link, Chicago's Lord Mantis has little in common with Nachtmystium's brand of blackened metal. Instead Lord Mantis offers a bass
heavy sound, reminding me of the unholy melding between a more organic version of Godflesh and the layered distortion of experi-metallers Pelican, just
to keep our comparisons in the greater Chicago area. Topped with acidic, deathly vocals and ultra evil lyrics, Spawning the Nephilim is a formidable first
release.

While the above description might lead one to think the bands output would be sludgy or doom-like, that isn't the case here, as the songs all move
forward with a sense of purpose unheard of in doom-metal circles. A bit of electronic skittering heralds the coming of thundering opener "Push Tug Wipe",
which sees Markuszewski, fellow guitarist Greg Goner and bassist Charlie Fell laying down a driving, low-register groove, with all three providing howled
vocals.

This is followed by the flowing noise-scape of "Unnatural Dwarfism", which starts out strong with a stuttering chug, before shifting tempos into a
Bolt Thrower-esque vibe, but it loses its impetus towards songs end. Lord Mantis comes back strong, however, with a trio of absolute crushers in
"Lord Mantis", "Spawning the Nephilim", and "Abducted by Aliens"; all three heavy, punishing tracks that destroy everything in their path.

Next up, "Hit By A Bus" features one of the cd's catchiest riffs, highlighted by splashy, attention-grabbing cymbalwork from drummer Bill
Bumgardner. The proceedings come to a close with "Zealot", which kicks off like a rusty dumpster bouncing down an embankment, before
settling into a monolithic plod.

All is wrapped in suitably demonic cover art from Mike Miller, the "Spawn"-ing of the title echoed in his MacFarland-esque depictions of rended
angels and birthing demons.

If I were to actively look for things to gripe about, I'd say that while catchy enough, the riffs aren't terribly complex, but this is mititgated by the fact
that they never overstay their welcome. Also, there isn't a lot of variation in the bands' sonic palette, and Spawning the Nephilim is a little slim at 35
minutes. That said, The middle three tracks alone are worth the price of admission. I thoroughly enjoyed my first bludgeoning at the hands of Lord Mantis.
Check 'em out. 7/10