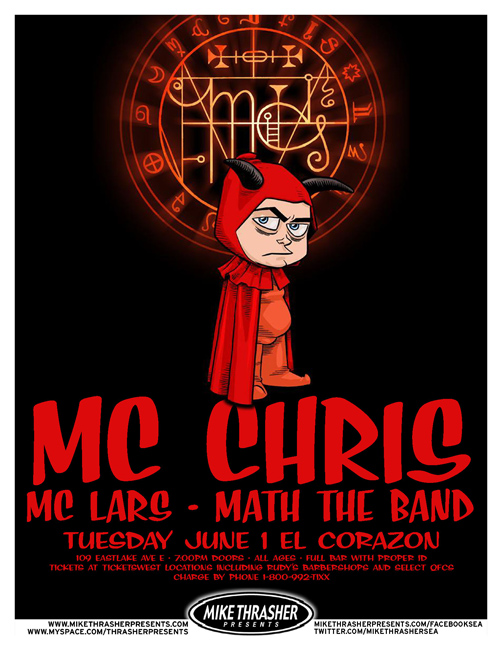 MC Chris with MC Lars and YTCracker and Math the Band


And now for something completely different. Usually when I hit Seattle's El Corazon [Link], it's to
attend yet another fine metal show. This week, however, I found myself returning to check out one of the
premier nerdcore rap events of the summer: mc chris's Hellraiser tour. Although, maybe that description
isn't entirely accurate. Despite all of the Star Wars, video game, and pop-culture references in his rapping,
mc chris, of "Fett's Vette" and adult swim fame, has never considered himself a nerdcore rapper. Nor has
MC Lars, who went so far as to declare the subgenre dead just last year. As it stands, YTCracker is the
only artist on the bill still flying the nerdcore flag, yet the evening held plenty of interest for fans of the genre.

First up was Math the Band [Link, MySpace], a hyperactive chiptune duo from Providence, RI,
whose music reminds me of a punkier version of Anamanaguchi, or Atari Teenage Riot, had they fallen
into a blender with a bucket of Skittles. To kick things off, Math the Band opened with a cover of Andrew
WK's "It's Time to Party"; Drummer Justine triggering samples and banging the hell out of a floor tom, while
guitarist Kevin filled in the tunes with plenty of kinetic crunch, as both shouted out lyrics in a style best described
as "early temper tantrum."

Math the Band tore through their set in a happy state of nervous abandon, pausing only to number each
song before rushing through it. By the time they reached their closing song, "Why Don't You Get A Haircut", I felt
almost as out of breath as they looked. Math the Band is a lot of fun live, definitely worth checking out. 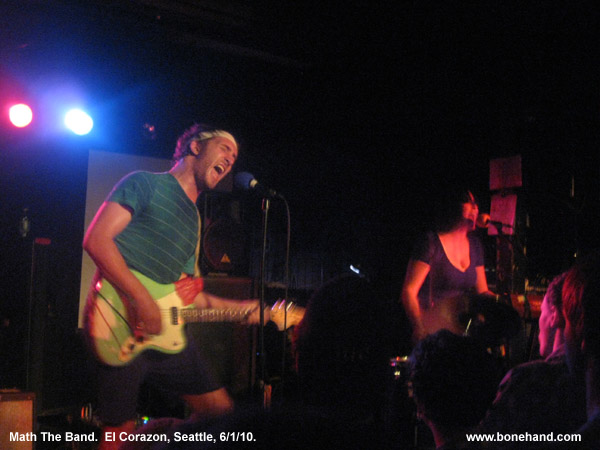 Math the Band’s gear had scarcely been cleared from the stage when MC Lars [Link, MySpace], laptop
and projector locked and loaded, was already inquiring of the sound man: “Can we start early?” This is a perfect example
of what I dig about MC Lars: a minimum of bullshit, and an unfettered enthusiasm for the music. A few seconds later,
“Space Game” was erupting from the PA, and the room began to rock in earnest.

Watching MC Lars and YTCracker [Link, MySpace] trade rhymes is always a treat, and this show was
no exception, as they bounced through a mix of tunes from their joint 2008 CD, Digital Gangster. In keeping with a
philosophy of always saying something with his music, the MC Lars selected tunes on display had a decidedly political
bent. The thought provoking “Manifest Destiny”, “Generic Crunk Rap”, and “911 AM”, played well together with older cuts
“Straight Outta Stockholm”, “21 Concepts” and YTCracker's classic "Meganerd", the latter’s laid back drawl
acting as the perfect counterpoint to Lars more frantic flow.

Mid set, the duo invited ’s own Beefy [Link, MySpace] to the stage, for a remix of “White Kids Aren’t
Hyphy”, and mics were scorched in short order, a true highlight of the evening. Also, it was great to hear a new cut each
from YTCracker and MC Lars, whetting the appetite for future releases. As had been my experience at ’s Aftercon
‘09, the excellent set was over way too soon as the pair finished with a loose but raucous take on personal favorite “Mr. Raven”,
leaving the crowd ready for more. 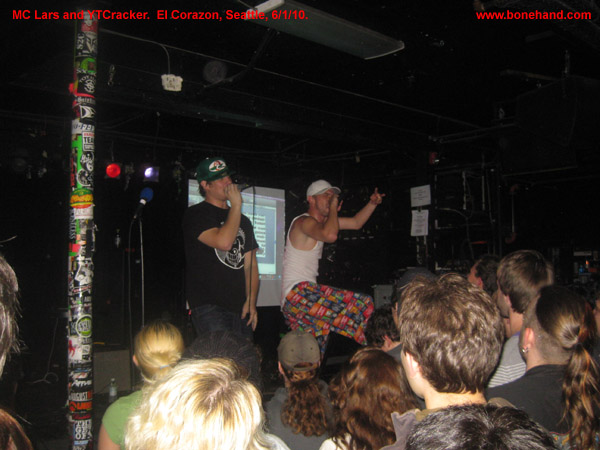 mc chris wasted no time taking advantage of the hungry crowd, hitting the stage with the JK Rowling
shout out "Neville", and peppering the crowd like a rap gatling (rappling?) gun with his unique, high-pitched vocal
style. That mc chris [Link, MySpace] commands an impressive level of crowd participation was immdiately evident.
When mc chris says get your hands up, hands get the fuck UP!

The rapper proceeded to work through the crowd-pleasing set, mixing his verbally adept, often hilarious
raps with liberal doses of standup quality ranting on such subjects as explaining the Clone Wars series to
children, and the appropriate time to partake of herb ("Just because I do a song about weed doesn't mean you
have to smoke it NOW!").

After a few rap lessons and a best T-Shirt contest, mc chris closed the proceedings with an "Another
One Bites the Dust" infused remix of Fett's Vette ("You all know this one by heart") and "Smackababy"
("This song's about child abuse...from a sympathtic point of view"). 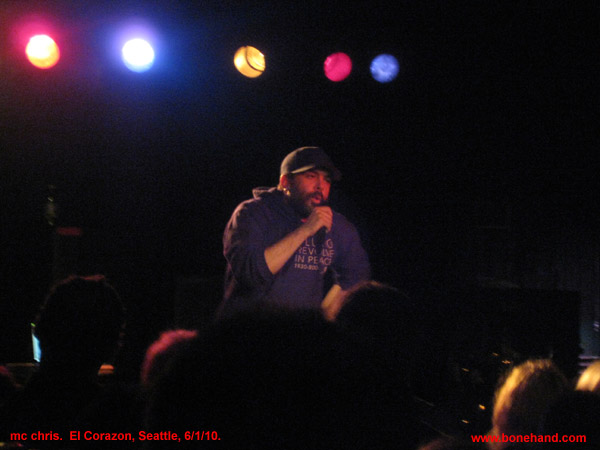 At 75 minutes, the set felt a little light for a headliner, but it wasn't until I saw the long line wending from
mc chris's merch table that I realized what I had missed. An evening with mc chris is as much about his connection
with his fans as it is about the music. While I would rather have heard the supremely catchy and notably absent
"Japanese Maid" than sit through a 10 minute T- Shirt contest, I now understood that mc chris was taking this
opportunity to give something back to his fans, and at the same time try to fill the silver bucket on his merch table
in his tireless fight against cystic fibrosis. (Chris has a 2 year old nephew who suffers from the disease, and has
become a champion of the cause as a result. Click HERE to add to the bucket yourself.) The rapping may have ended,
but mc chris's set would go on for at least another hour.

In closing, the Seattle stop of the Hellraiser tour was an excellent evening of energetic, amusing, and interesting
music, and judging from the size and energy of the weeknight crowd, I can only conclude that nerdcore rap is...undead.
You're welcome.

The Hellraiser tour will be crossing the U.S. through the end of June. Check it out.

These are admittedly incomplete and/or innacurate. Please shoot me a line at steve(at)bonehand.com if you
can provide corrections.