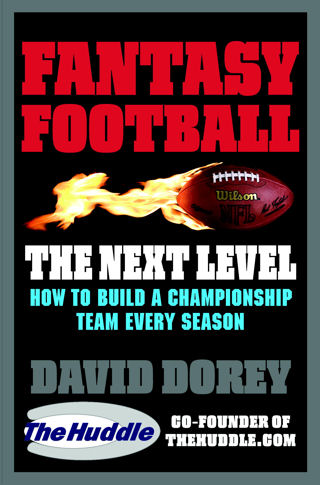 Fantasy Football: The Next Level, by David Dorey. Warner, 2007

Little did I know what a huge effect those words would have on me over the next decade.  Now,
football has been a pretty big part of my life as long as I can remember. I have many fond memories
of watching games with my parents as a little guy, collecting football cards in elementary school, and
later starting on my Pop Warner and High school football teams. Although I grew up in , I had attached myself to the Seattle Seahawks and made the team my own. As I roamed
I would raptly follow their autumn exploits, catching the odd game in person on the rare occasions
when my team and I would cross paths.

But despite my interest in the NFL, and love of the Seahawks in particular, I had somehow missed the
Fantasy football phenomenon until 1999, at the end of my tenure in . I had just joined a league
put together by a friend from work when my wife got a new job back in the area, and soon we
relocated back to the .

As I actively pursued my next paycheck, the next three months were a blur of resumes, job interviews,
and football stats. Any time not spent on playing with my year-old daughter, or calling prospective
employers, was devoted to hardcore NFL research. I soon realized that many of the trend assessment
and data analysis skills that I had developed at work dovetailed nicely with my new hobby. That first
season, I rebounded from losing my first two games to take second in the league. The next year, I won it all.

I was hooked, and it wasn’t long before I coerced my friends and family into joining my own
fresh-minted local, The Pacific Northwest Beer Drinkin’ Trash Talkin’ Football  League (now
entering its seventh season, as it happens). Not long thereafter, a book crossed my desk that would
also change everything.

That book was Committed: Confessions of a Fantasy Football Junkie, by Mark St. Amant.
Committed is the hilarious chronicle of the season in which St. Amant lived the dream: He quit his job
to concentrate solely on winning his Fantasy Football league. This is a fantastically fun read, by all
means check it out. It was within the pages of this fine book that I first heard about The Huddle.

The Huddle is in my opinion the finest FF website around, a wealth of information on the game itself,
as well as the portal to the amazing community of obscenely knowledgeable football fans that can be found
frequenting the forums. I have been haunting the site religiously for several years, and enjoy immensely
the high level of competition that I have found playing in several All Huddle leagues. Needless to say
I was thrilled to hear that there was a new book hitting the shelves this fall from David M. Dorey, one
of the co-founders of this tremendous resource.

I say this as objectively as I am capable, given how in the bag I am for The Huddle, but as a nine-year
veteran of FF, I find Fantasy Football: The Next Level, to be by far the most purely useful book on the
subject I have ever read. David presents the book from a practical "teach a man to fish" standpoint,
providing any FF owner, from novice to know-it-all, with a number of great tools to improve their game.
The first section of the book shows you how to examine your league based on it’s own specific scoring
system, in order to assess how to best build your team in the forthcoming season. This is followed by an
in-depth discussion of each individual position, with detailed instructions on how to develop your own
personalized player rankings and projections, again within the framework of optimizing each for your
league's needs. The depth of material on player valuation presented here is incredible, and alone worth
the price of admission.

Next the author covers how to best approach a fantasy draft, outlining various strategies to follow and
pitfalls to avoid in building a squad capable of finishing in the money in any given year. Finally David closes
the book proceedings with specific, actionable strategies for in-season team management through the playoffs,
as well as a few thoughts on state of the hobby, it's importance in today's workplace, and the future of
Fantasy Football .

I found the information on the importance and best practices for creating your own projections to be
extremely helpful, something I am implementing this season for all of my leagues. All this great information
is delivered in David's winning, humorous style, which makes for an absolutely delightful read. If you have
any interest in Fantasy Football, The Next Level is a must-read. Pick it up NOW!

Unless of course you are an owner the PNW League. In which case… Okay, I have to come
clean here.

I admit it, there is no such book.  I made it all up just to make my Sunday deadline. Seriously.
Move along…Nothing to see here….