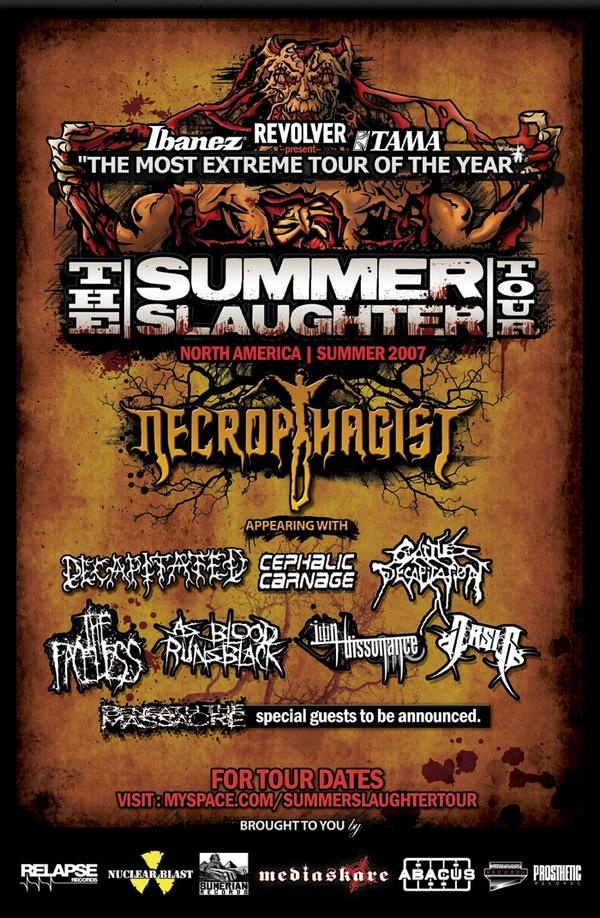 Featuring Necrophagist, with Decapitated, Cephalic Carnage, Cattle Decapitation,
The Faceless, Ion Dissonance, and Beneath the Massacre.


This week, in an altogether rare move for me on a school night, I set forth braving traffic, heat and
my own exhaustion to join a sellout crowd to for the 2007 Summer Slaughter Tour at Seattle’s Studio
Seven. Billed as the “Most Extreme Tour of the Year”, I was looking forward to sampling this full
nine-course buffet of state-of-the-art Extreme Metal, topped off by headliners Necrophagist. With Nile
hitting the road in a few weeks, the claim of “Most Extreme…” is arguable, but as given the sheer
breadth of bands on display, it seemed to me there would truly be no better forthcoming showcase for
me to appraise what’s happening currently in the world of metal. Unfortunately, as the anticipation for
this tour was mounting, some bad news was announced. Two of the acts set to play, As Blood Runs
Black and Arsis, were forced to cancel. While this was disappointing news, there was still more than
enough music on tap to satisfy the discerning metal fan's fevered brain.

The first act to hit the stage was ’s Beneath the Massacre. Having enjoyed hearing their
debut Mechanics of Dysfunction, I’ve been looking forward to checking out their live effort. Despite being
hampered by a rough guitar sound, the band powered through it and did not disappoint. Their music
reminds me of nothing more than a punch-drunk prizefighter, staggering around the ring in a seemingly
incoherent fashion before bludgeoning the shit out of an unwitting opponent with unyielding purpose.
Beneath The Massacre's set was coolly brutal, but way too short. As a bonus though, I finally had a
chance to pick up their CD, which has been out of stock everywhere I’ve looked lately.

I was somewhat less familiar with second act Ion Dissonance, who also hail from Montreal.
Although I have had a chance to hear their first two albums, for whatever reason their music
has failed to grab me. They did turn in a respectably solid set though, and I thought that drummer
JF Richard really stood out. He was really going for it, a very nice performance on his part.

Between sets, I had the opportunity to spend a few minutes talking metal with Jorge, guitarist for ’s Barefoot Barnacle. I really dig the early recordings I’ve heard from these guys, and enjoyed
meeting the rest of the band at the show. I hope to spend my hard-earned money on a debut CD from
this band at some point in the not too distant future.

Next up was the band I had been anticipating most this evening, ’s The Faceless. I picked up
their debut CD Akeldama in April and it has been circling my brainpan in heavy rotation ever since.
Their music displays an exceedingly cool combination of the highly technical and the melodic, notable
even amongst such incredibly creative peers. The loss of their bassist to a funeral for the evening did
result in a thinner overall sound, but the band was still able to more than match their recorded efforts
live, playing tight as can be through stop-on-a-dime time changes. Too bad they were only able to
play four songs, but fortunately, two of them were most excellent favorites “Pestilence” and
“Ghost of a Stranger.” I love this band, and can’t wait to hear more from them. 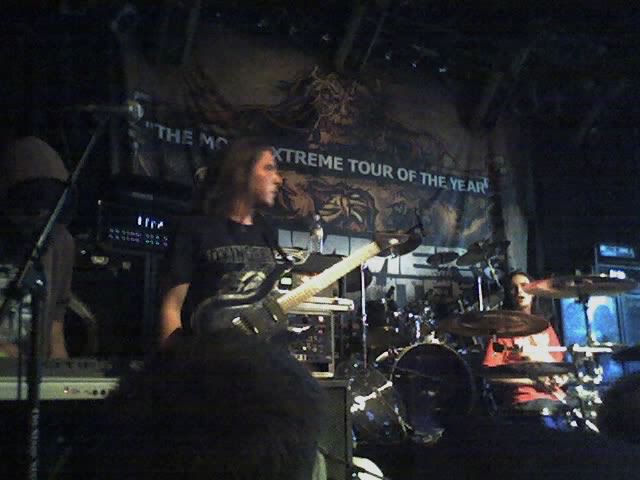 Next up were San Diego hardcore vegetarians Cattle Decapitation. I’ll admit I was not won over by
my lone listen to their most recent release Karma Bloody Karma, but HOLY SHIT! This band absolutely
tears it up live! CD kicked seven kinds of ass during their half hour set, the band laying down a brutal
thunder while frontman Travis Ryan screeched like a madman above it all. This guy has an insane vocal
range, hitting everything from a low growl to a primal screech that’ll raise the hairs on your neck. I was
seriously impressed with their set, which raised the level of the show perfectly for the bludgeoning to
follow. 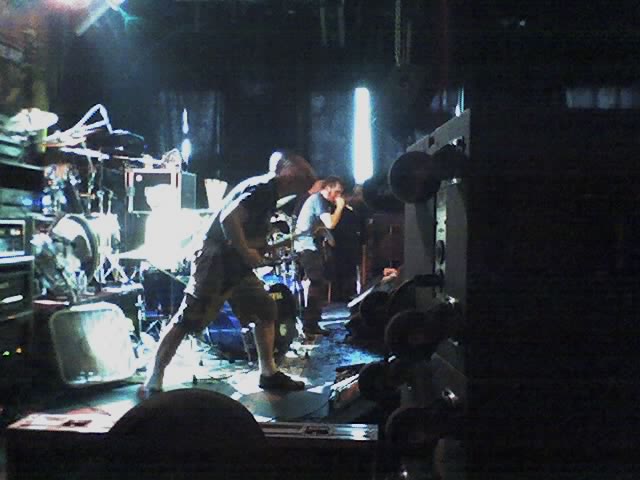 
That bludgeoning would come at the hands of Cephalic Carnage, who arguably bested the headliners
for top performance of the evening. Frankly, I almost feel a little unqualified to review Cephalic, as the
hyper technicality and creativity of their music occasionally leaves me feeling like I’m in over my head.
That said, I really dug the alien-tinged human decay vibe of their latest release Xenosapien, and was
thrilled to have the opportunity to check out their live offering.

The band took the stage with a forebodingly atmospheric wave of synths before tearing into the audience
like a grizzly bear on acid. Guitarist Zac Joe proceeded to fire jaggedly precise riffs over the audience
while whirling like a dervish, as drummer John Merryman dazzled with an adept display of percussive
creativity. Meanwhile, Vocalist Lenzig Leal did a masterful job of working the jam-packed crowd into an
insane moshing frenzy. The band was in awesome form, and their set alone was worth
the price of admission. 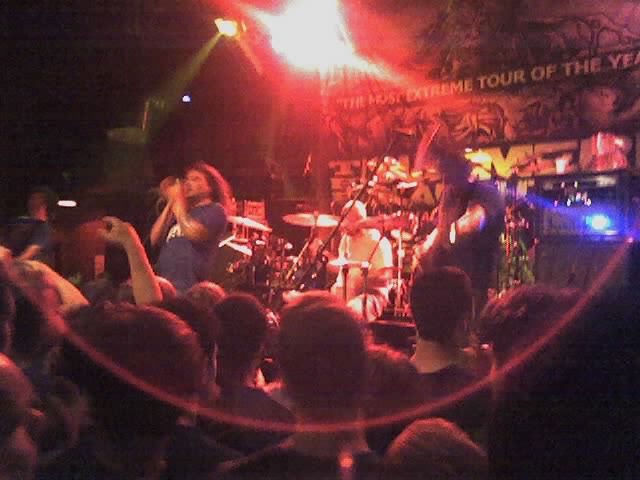 
The penultimate slot of the evening was taken by Polish death metal merchants Decapitated, who were
new to me. They definitely could assume a monster groove, laying down more than a few solid headbanging
breakdowns, but to my ears their unfortunate position, following the insane histrionics of Cephalic Carnage,
had the unintended result of reducing the bands output to plain vanilla in comparison. The crowd seemed
to like them more than I did though, as they were moshing up a storm.

At long last the headliners, Germany's Necrophagist took the stage, hitting the audience with wave after wave
of blistering guitar. The superb musicanship and jaw-dropping technicality displayed by this deservedly
acclaimed band was just as impressive in the live setting as on their recorded output. However, as the set
unfolded the audience seemed surprisingly subdued. I'm not sure if it was due to the previous five hours of
withering heat in this sweatbox of a club, or because anyone in the audience who has ever even touched a guitar
was struck dumb, mesmerized by Muhammed’s Suicmez’s spectacular fretwork. But that would change mid-set,
when drummer Marco Minnemann took over for an extended drum solo, and put on an absolute fucking clinic.
This guy does more with two high-hats than a lot of drummers do with an entire kit, and he rocked the place with
the finest display of live drumming I have seen since Clutch hit town, which is no mean feat. That solo seemed to
breathe fire into the audience, who went absolutely insane, and exhorted the band to close out the show in
scorching fashion, an excellent end to a great evening of metal. 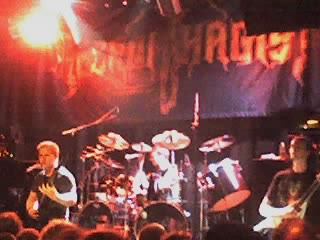 
In closing, the show as a whole was a perfect opportunty to hear a wide variety of the latest that
metal has to offer. If headbanging is your cup of tea, then check out this tour when it hits your town
and drink deeply. You won’t be dissapointed.