An All American (Zombie) Family

I'm not 100% sure what made me want to attend the Fremont Zombie Walk. While I am a big fan of horror movies, and those containing zombies
in particular, I'm not really a parade guy. In fact, the initial draw for me was the evening's screening of the film Shaun of the Dead under the stars. To be
sure, the event sounded like a lot of fun. The "Red, White and Dead" celebration, sponsored by Fremont Outdoor Movies,  in addition to screening of one
of my favorite films,was slated to feature live music from the band Kirby Krackle, an attempt on the record for "Largest Thriller Dance", and an assault
on the Guinness record for largest Zombie Walk.  However, knowing Shaun to be a bit much for he 6-to-9 year old set, my original intent was to get a
babysitter, grab dinner and a few drinks, and catch the flick with my lovely wife.

However, plans were soon changed. Michael Jackson's passing, the previous week, had a little to do with it. The Thriller video was once again in
heavy rotation, and the family was soon practicing their moves along with the video. So it seemed we now had another reason to give it a try.
Although last year's Halloween trip to a local haunted trail left me a little worried about the kids ability to absorb the appearance of some of the Walk's
more frightening denizens, I began to plan in earnest.

First, I touched base with Brother D of the Mail Order Zombie podcast. Brother D's experience working on a few low budget zombie films led me
to believe that he might be a great resource for makeup tips, and he did not disappoint. Derek was kind enough to provide us with a quick email tutorial
on latex makeup and a homemade blood recipe, while a special Walk-centric episode of the Seattle Geekly podcast provided a few last minute details.
28 Hours Later (or thereabouts), I was off and running. Yeah, running. I said it.

The morning of the event, my son and I stopped by the local costume shop for makeup, and the owner was ready for us. She stated that
several people had already been by on the same mission, and as she pulled together our needs, two more zombies-to-be stopped in as well,
our first indication of how successful the night's turnout would be. The goods in hand, we returned home and began work on our costumes and
makeup.

Our son wanted no part of any "owwie", pretend or otherwise, so he opted for only a little color on his cheeks to complete his take on
"Marvel Zombie Wolverine''. Our daughter on the other hand got right into the spirit, carefully applying a ghostly pallor to her already pale skin, and
surpising me with a request for a latex neck wound. Julie focused her attention on a festering cheekbone, while I went to work on my own oozing skull
fracture. For the next half hour the bathroom was a frenzy of greasepaint and latex as we applied our ghoulsh good looks, giggling all the while. I then
repaired to the backyard for my "piece de resistance", barbecue soot to rub into my clothes for the proper "buried" effect.

Costumes complete, we departed for Fremont. As we drove into Seattle from our Eastside neighborhood, the kids tried desperately to capture
the attention of our fellow drivers. 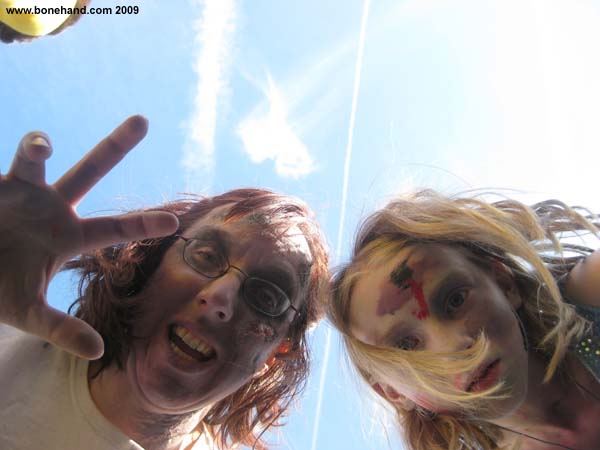 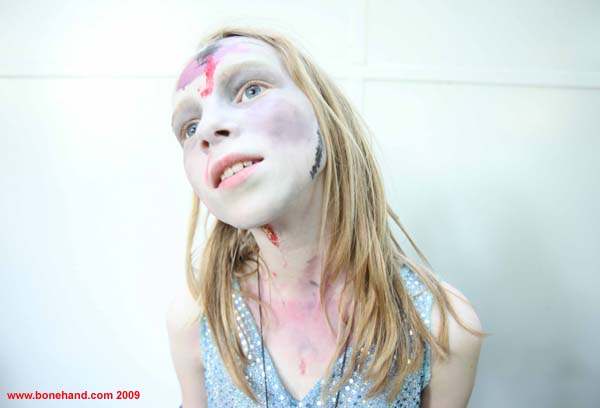 
Upon our arrival, we parked in an adjacent neighorhood, spent a few moments touching up and taking photos, and began our walk. As we neared the
event site, the turnout was amazing.  Folks limped and shambled in from all directions as "living" onlookers smiled and waved. We took our place in line,
inching slowly toward the registration tables where volunteers were carefully collecting signatures for the run at the Guinness world record. According
to Guinness:
"The largest gathering of zombies involved 894 participants at Monroeville Mall, Monroeville, Pennsylvania, United States on 29 October 2006."

This is of course a venerable location in zombie film lore, as the Monroeville Mall served as the location of the beloved 1978 film Dawn of the Dead,
in close proximity to the Pittsburgh home of the film's Director, George Romero, known as the Godfather of Zombie Films. While this record has been broken
several times unofficially, most recently in 2008 in Grand Rapids, MI in an event that drew over 4000 attendees, the numbers from these unofficial attempts have
never been submitted to Guinness, as the attendance was not properly documented. Hence the long lines as the hordes of Northwest Undead descended upon
clipboards and folding tables to add their names to the lists. 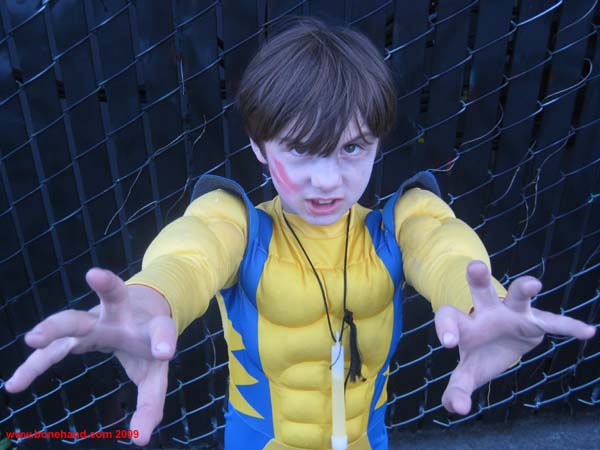 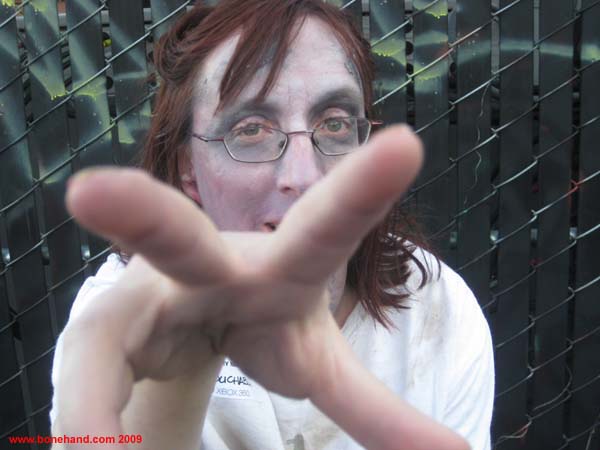 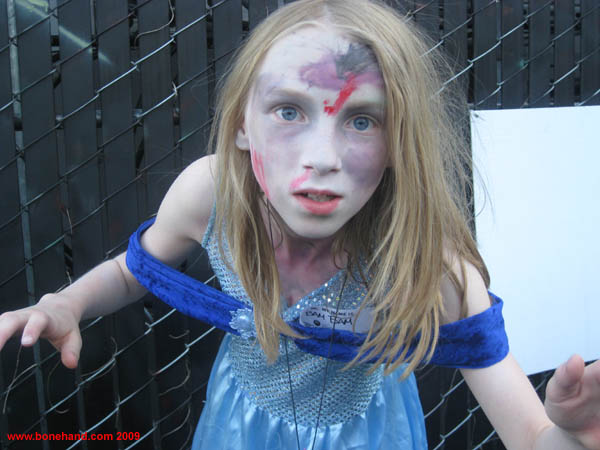 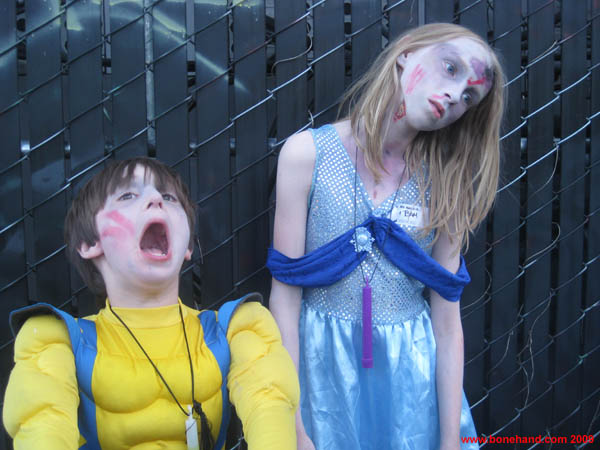 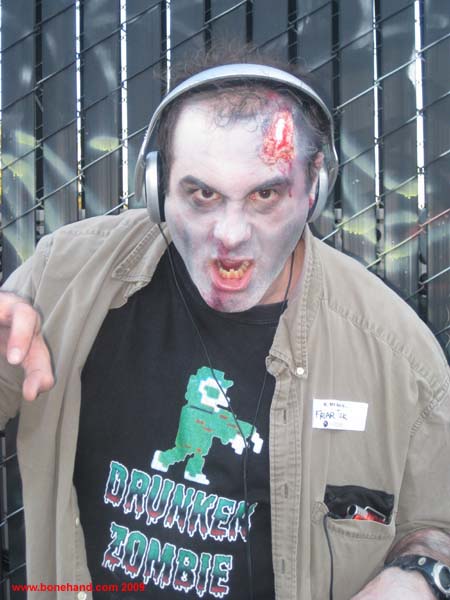 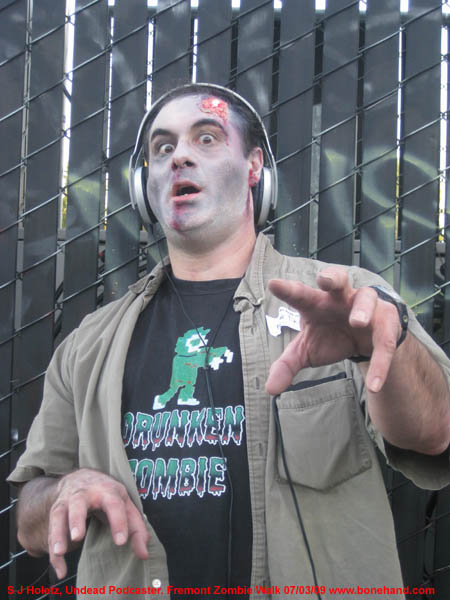 Once logged, we were allowed to enter the event proper, large parking lots with huge screens painted on the sides of their adjoining buildings.
The first lot, featured a small stage, a makeup booth for those who came unadorned with gore, and a photobooth provided by the creators of the
Nightzero graphic novels, whose  efforts on our behalf can be seen below. We then joined the moaning, shuffling throng for a loop around the Fremont
neighborhood, the following request ringing in our ears: "Please refrain from wiping blood on the windows of local businesses". Not something you hear
every day. 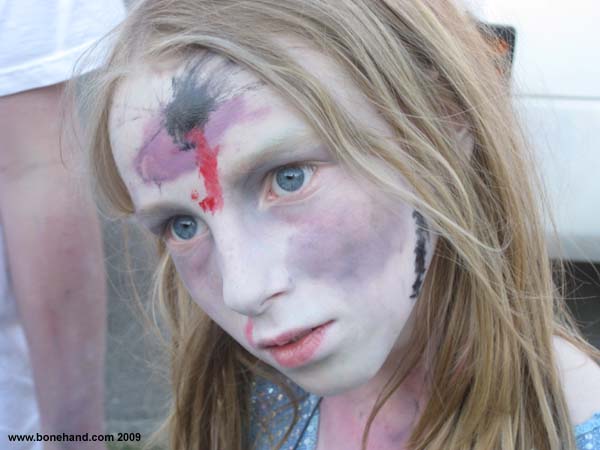 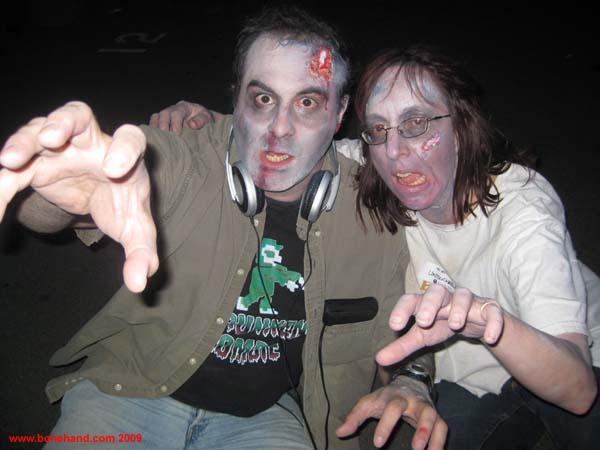 As we walked, we were surrounded by folks waving and taking pictures, and film crews from local media. Passers by would stop to cringe in faux
terror or ask my son about his superhero affiliation. As we lurched along, rogue Zombies among us would encircle cars on the street, mugging for the
passengers or leering at diners through restaurant windows. However, long lines of undead in bars and ice cream shops cheerfully lessened the horrific illusion. 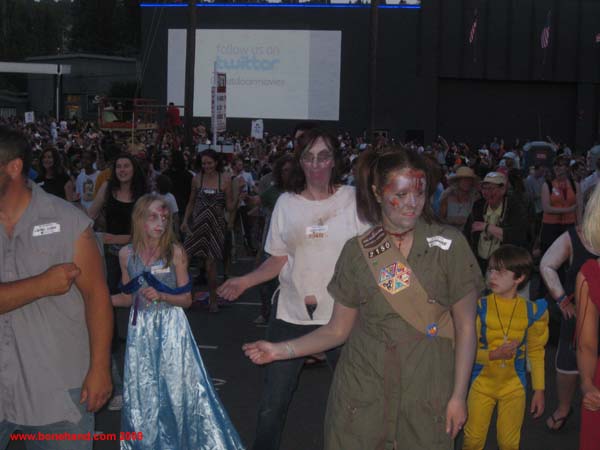 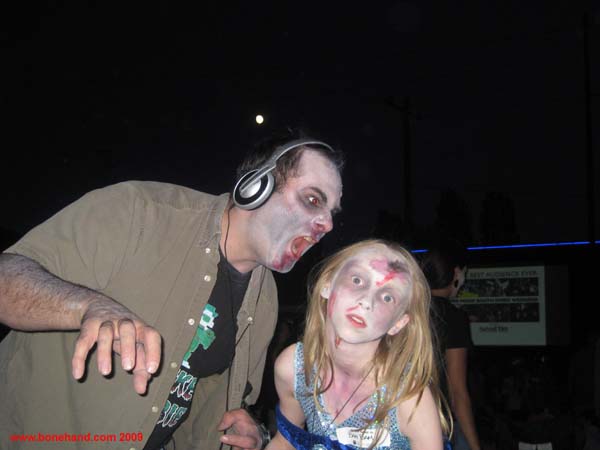 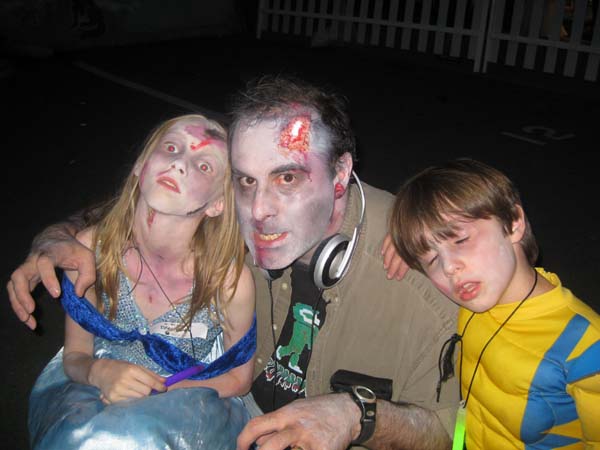 Our circuit complete, we returned to ground zero for the rest of the evenings festivities. A quick lesson in Thriller and the family gave it their best
effort, as documented HERE by a quick fingered filmmaker who stood directly behind us in the crowd. 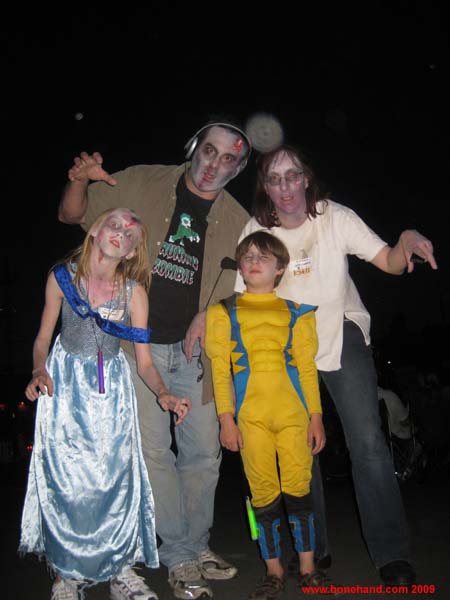 The night drew to a close, and as we shambled off to our car before Shaun of The Dead could scar the kids' tender psyches, it was unclear
whether or not our efforts had been enough to claim the Gunness record. However, later that evening, OutdoorMovies reported via Twitter that the event
had collected the signatures of 3,848 officially registered Zombies, enough to shatter all previous records. The achievement is slated to be recognized by
Guinness at this year's San Diego Comic-Con.

In all we had a great time at the Zombie walk, an all-together unconventional, yet wonderful family bonding experience. And I  have no doubt that,
should Seattle be called upon to defend our world record from, say, those Lombardi Trophy thieving bastards from Pittsburgh, we undead shall once
again rise...to the occasion. 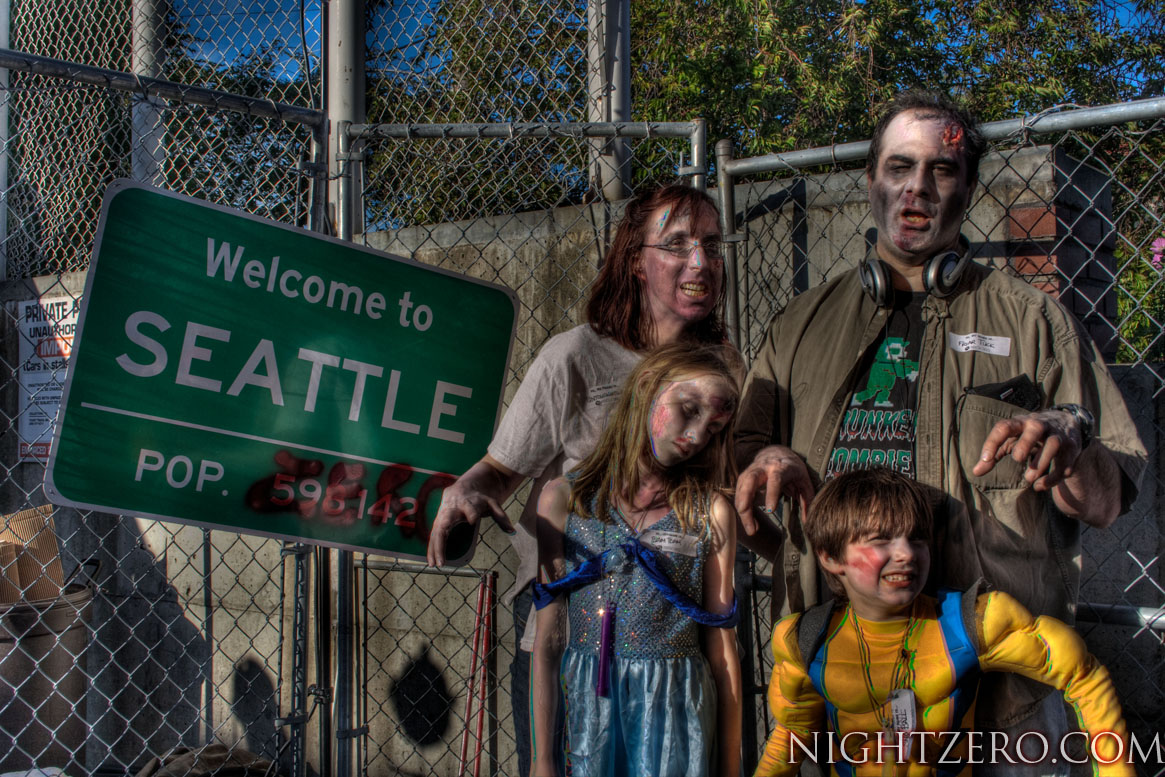 
All photos taken on July 3rd 2009, at the "Red White and Dead" Fremont Zombie Walk in Seattle, Copyright 2009 by S J and J A Holetz,
except where noted.